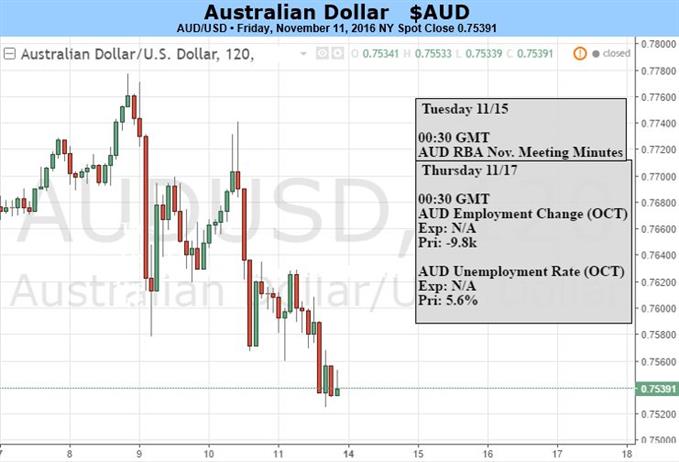 Breakneck volatility in the wake of the US presidential election may have finally set direction for the Australian Dollar after three months of aimless drift. The markets spent much of last week on-boarding the unexpected victory by Republican nominee Donald Trump in the US presidential election and adjusting portfolios for the policy pivot on the horizon. The sum total of investors’ prognostications appears to bode ill for the Aussie.

First, Mr Trump’s advocacy of grandiose infrastructure spending, tax cuts and deregulation has been interpreted as inflationary. The US economy has been heating up since early 2015. Wage inflation has trended higher while payroll gains decelerated, pointing to a tightening labor market. Meanwhile, a sharp US Dollar rally stalled and crude oil recovered, helping to digest prior disinflationary shocks.

A large dose of fiscal stimulus against this backdrop is akin to pouring gasoline on a flickering coal heap: a conflagration seems bound to happen. That calls for faster tightening on the part of the Federal Reserve. The markets have clearly noticed: benchmark US Treasury bond yields duly rallied and the 2017 rate hike path priced into Fed Funds futures noticeably steepened.

For its part, the RBA has signaled it is in wait-and-see mode for the foreseeable future. Coupling this with a more hawkish posture from the Fed will probably translate into an Aussie-negative shift in relative yield expectations. In fact, the prospect of higher US borrowing costs may prove to be disproportionally painful for the Australian unit because its comparatively higher-yielding profile is its main allure for traders.

Second, Mr Trump seems to be at best a skeptic on the issue of free trade. His platform has prominently featured withdrawal from the Trans-Pacific Partnership (TPP) as well as a renegotiation of the NAFTA agreement with Canada and Mexico. If he pursues this in earnest, a clash with trading partners may erect new barriers to cross-border commerce.

On the other side of the equation, free trade disruption will probably boost import prices. For a voracious consumer of foreign goods like the US, this is likely to serve as a significant amplifier on overall price growth, compounding an already inflationary environment and reinforcing the anti-Aussie shift in relative monetary policy trends.

The pricing in of this world view is likely to resume next week, sending the Aussie lower. A busy Fed-speak docket coupled with US PPI and CPI numbers may reinforce momentum if a repeat of recently hawkish rhetoric and further evidence of firming price pressures underscore the on-coming Fed vs. RBA divergence. Australian jobs data may temporarily slow momentum but probably won’t be potent enough to offset it.