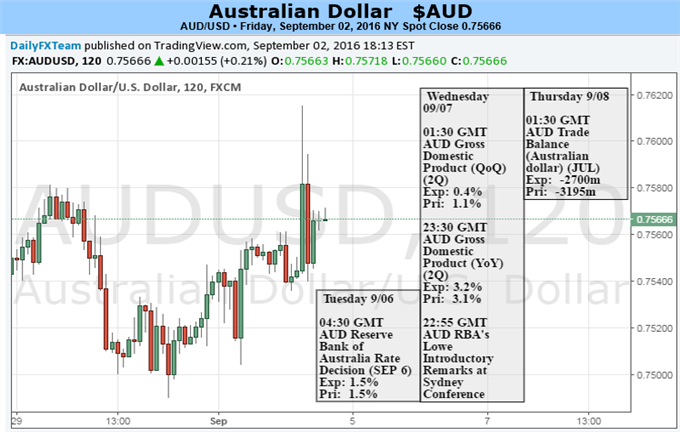 The near-term series of higher highs & lows in AUD/USD may gather pace next week as the Reserve Bank of Australia (RBA) is widely anticipated to retain its current policy in September, while the regions 2Q Gross Domestic Product (GDP) report is projected to highlight the fastest pace of growth since 2012.

According to a Bloomberg News survey, all of the 26 economists polled forecasts the RBA to keep the benchmark interest rate on hold at the record-low of 1.50%, and the board may largely endorse a wait-and-see approach for monetary policy especially as Governor Glenn Stevens prepares to depart from the central bank. Even though the RBA warns ‘the latest data on inflation and labour costs confirm that domestic cost pressures remain subdued,’ the central bank may stick to the sidelines throughout the remainder of the year as ‘low interest rates and the depreciation of the Australian dollar exchange rate since early 2013 are continuing to support the rebalancing of economic activity towards non-resource sectors.’ With that said, Australia’s 2Q GDP report may further the case for the RBA to adopt a more neutral outlook for monetary policy as the region is expected to grow an annualized 3.2% following the 3.1% expansion during the first three-months of 2016, and the aussie may continue to outperform its U.S. counterparts as the mixed data coming out of the world’s largest economy dampens bets for a September Fed rate-hike.

The weaker-than-expected U.S. Non-Farm Payrolls (NFP) print accompanied by the slowdown in household earnings may encourage the Federal Open Market Committee (FOMC) to retain the current policy at the September 21 interest-rate decision as central bank officials persistently warn ‘most survey-based measures of longer-run inflation expectations were little changed, on balance, while market-based measures of inflation compensation remained low.’ The low-inflation environment across the major industrialized economies may encourage the FOMC to follow a similar path to 2015, but we may see a growing rift within the central bank as 2016-voting member Loretta Mester argues that there’s a ‘pretty compelling’ case for higher borrowing-costs. Nevertheless, the limited U.S. docket for the week ahead leave the U.S. dollar vulnerable to narrowing expectations for an imminent rate-hike as Chair Janet Yellen appears to be in no rush to further normalize monetary policy. 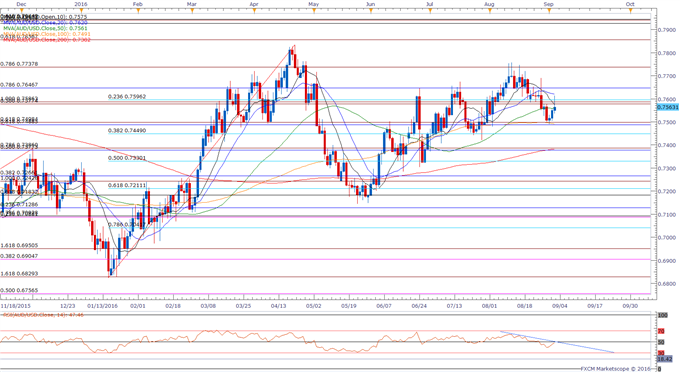 The near-term outlook for AUD/USD remains mired as the pair preserves the downward trending channel carried over from the previous month, but a series of positive developments out of Australia may threaten the bearish pattern as the pair carves as series of higher highs & lows coming into September. In turn, a break of trendline resistance along with a break/close back above former support around 0.7650 (78.6% retracement) may generate a larger advance in the exchange rate, with the next topside target coming in around 0.7740 (78.6% retracement).