Australian Dollar at the Mercy of UK EU Membership Referendum 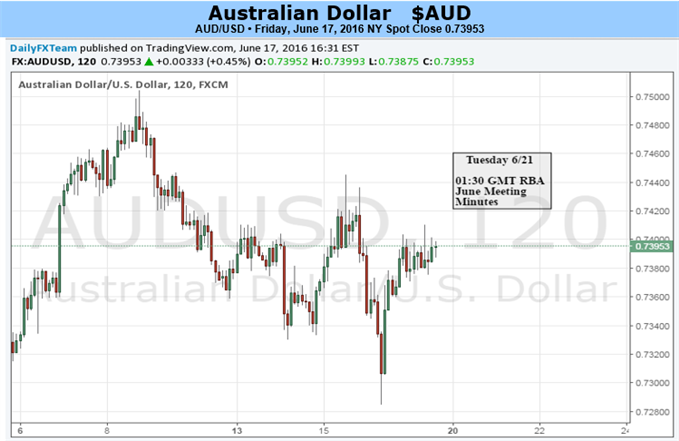 Fundamental Forecast for the Australian Dollar:Neutral

• Yellen testimony, RBA meeting minutes could pass below the radar

Under normal circumstances, the week ahead might have brought a variety of potential market movers for the Australian Dollar. Fed Chair Janet Yellen is due to testify in Congress on the trajectory of US monetary policy. She will almost certainly be grilled about May’s dismal payrolls data and pressed to offer an explanation for why the central bank has flattened its projected rate hike path even as it upgraded inflation outlook.

Minutes from the last meeting of the RBA are also on tap, and may offer clues about whether Glenn Stevens and company have truly settled back into a holding pattern or if the recent standstill is merely a pause before further easing. The preliminary set of June’s Eurozone PMI numbers is also of note in as much as the currency bloc is collectively the world’s economy, so activity trends there are an important input for overall global growth and market-wide sentiment.

In practice, all this may fall by the wayside as traders focus on a singular binary outcome: the UK European Union membership referendum. The outcome will be pivotal for the direction of risk appetite trends. Opinion polls in recent weeks have started to skew toward a preference for so-called “Brexit”. No country has ever left the EU under such circumstances, much less the region’s second-largest economy.

If the Leave campaign does prevail, a two-year period of negotiation over exit terms will mire the entire ordeal in prolonged uncertainty. Needless to say, all this does not bode well for risk appetite or near-term stability – a dire prospect for the sentiment-sensitive Aussie – considering the likelihood of a violent response from the markets. Indeed, options pricing points to grotesquely elevated 1-week implied volatility readings across the G10 FX space.

With this in mind, investors seem like they will be unwilling to commit to a directional bias on the basis of anything until the final voting tally has been announcement. At the same time, pre-referendum polling is likely to take on an even greater significance if a more conclusive-looking tilt in public opinion begins to emerge. Volatility on this basis is unlikely to see lasting follow-through however considering polls have been woefully inaccurate in the 2015 UK general election and the 2014 Scottish Independence referendum.