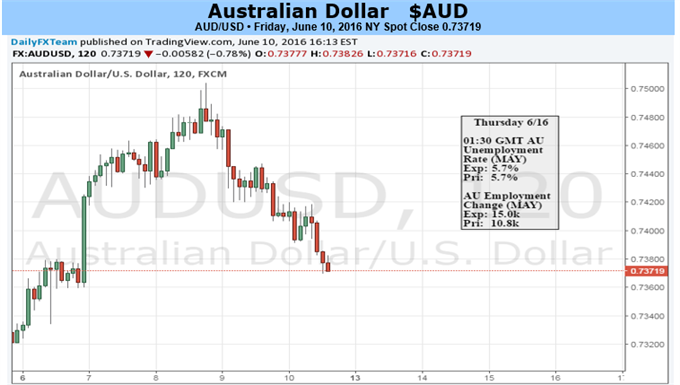 The Australian Dollar saw dramatic seesaw volatility last week. The currency surged to a two-month high against its US counterpart after a neutral-sounding RBA policy statement poured cold water on near-term rate cut speculation, only to give away most of the advance amid risk aversion toward the week-end. Such sharp swings underscore the comparable potency of the rates outlook and sentiment trends in shaping Aussie price action, paving the way for sharp price swings in the days ahead.

All eyes will be on the FOMC monetary policy announcement in the week ahead. Priced-in rate hike probabilities plunged after May’s dismal US jobs report. Indeed, investors see the chance of an increase at a mere 2 percent, down from close to 30 percent just a few weeks ago. Fed officials have been somewhat dismissive of the dovish turn in the markets’ outlook, warning that it would be wise to over-extrapolate from a single data point subject to multiple revisions in the coming months.

With that in mind, traders may be surprised to find policymakers’ plan for two rate hikes this year as well as baseline forecasts for growth, employment and inflation remain broadly unchanged. Such a result would press the point that the central sees May’s number as an anomaly that doesn’t necessarily alter the on-coming resumption of policy tightening. That may shift relative Fed versus RBA policy expectations and weigh on risk appetite, sending the Aussie Dollar lower alongside stock prices.

May’s labor-market figures will be in the spotlight on the domestic front. A net 16.5k jobs gain is expected while the unemployment rate holds unchanged at 5.7 percent. Australian economic news-flow has increasingly improved relative to consensus forecasts since late April, opening the door for an upside surprise. Such an outcome may reinforce an image of the RBA that is in no hurry to resume the rate cut cycle, a presumably supportive proposition for the currency.

On balance, this sets up another round in the tug of war between monetary policy bets and macro-level sentiment trends for influence on Aussie price action. “Brexit”-related headline risk amounts to a wildcard that may emerge as a tie-breaker. Markets are increasingly sensitive to polling data shaping expectations ahead of the fateful referendum on June 23. Signs that a UK exit from the EU is looking more likely may stoke AUD-negative risk aversion. Rising chances of a status-quo result may yield the opposite result.