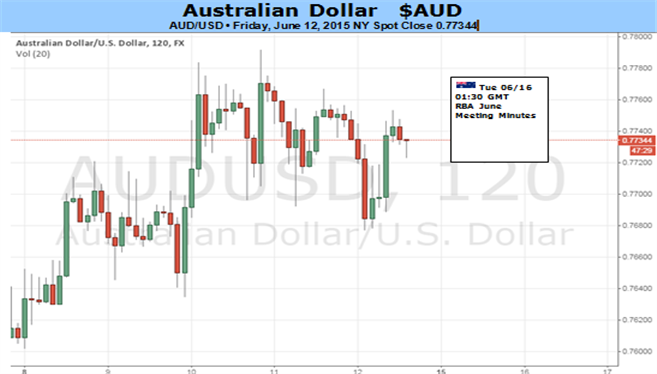 The Australian Dollar is likely to see external event risk dominate the spotlight in the week ahead as sentiment trends move into the driver’s seat. Indeed, the correlation between the currency’s average value against its top counterparts and the MSCI World Stock Index – a proxy for risk appetite – has recovered to the highest level since late December 2014 at 0.83 (on rolling 20-day studies).

The Federal Reserve monetary policy announcement is at the forefront. June’s sit-down will feature the expanded quarterly meeting format, with the policy statement accompanied by an updated set of economic forecasts from the FOMC rate-setting committee and a press conference with Chair Janet Yellen. Needless to say, investors will be acutely focused on what the outcome will mean for evolving speculation about the timing of the first post-QE interest rate hike. As it stands, Fed Funds futures price in the onset of tightening in October.

The Fed policy outlook has deteriorated since the beginning of the year as a slump in economic growth in the first quarter fueled bets that officials will delay stimulus withdrawal. This narrative is remarkably similar to what was seen in 2014. Then too, investors expected the FOMC to delay or at least slow the pace of “tapering” QE asset purchases following a disappointing start to the year. For its part, the central bank maintained that the slowdown owed to transitory factors. It opted to stay the course and delivered the end of QE3 on schedule. Policymakers’ rhetoric in response to this year’s hiccup has been virtually identical, underscoring similarities between current events and those of 12 months ago.

With this in mind, it seems plausible to consider that the Fed will opt to proceed toward policy normalization along the same timeline that was intended prior to the first-quarter misstep, mirroring 2014. That would imply a move to tighten by around mid-year according to commentary from key officials delivered at the start of the year. If this is truly the case, the FOMC may use the extensive amount of information on offer at the June meeting to lay the foundation for tightening at its subsequent sit-down in late July.

Clues to this effect may force a dramatic hawkish shift in priced-in expectations. That bodes ill for risk appetite, which has enjoyed a significant boost from the Fed’s ultra-easy stance in the aftermath of the 2008-09 financial crisis. If this translates into broad-based liquidation across the spectrum of sentiment-linked assets, the Australian Dollar will not be left unscathed.