Australian Dollar Bracing for Another Volatile Week Ahead 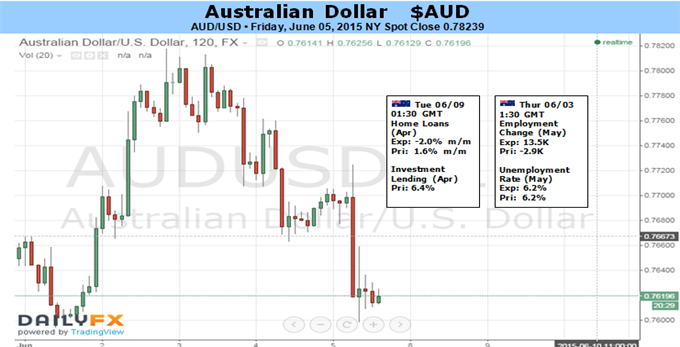 Last week proved volatile for the Australian Dollar. Prices initially soared after the RBA disappointed bets on a dovish turn in forward guidance at its policy meeting, but optimism swiftly faded after a dismal set of trade figures rekindled easing speculation. An ample supply of scheduled event risk is likely to keep activity elevated in the days ahead.

On the domestic front, May’s Employment report will be in focus. The economy is expected to add 15k jobs compared with the prior month. Last week’s first-quarter GDP print notwithstanding, Australian economic news-flow has increasingly underperformed relative to consensus forecasts in recent months. That suggests analysts are more optimistic than realized outcomes warrant, opening the door for disappointment.

With that said, leading survey data shows manufacturing- and service-sector hiring picked up last month. While this argues in favor of a better headline employment reading, similarly upbeat cues did not accurately foreshadow April’s 2.9k net job loss. As such, they ought to be taken with a grain of salt. In any case, conflicting cues and a wide diversity of forecasts (as seen in a survey of economists polled by Bloomberg) suggests volatility is likely to follow whatever outcome emerges as those on the wrong side scramble to reposition.

A softer Chinese CPI print may offer a bit of a counterweight. The headline inflation rate is expected to decline to 1.3 percent, the lowest in four months. The latest drop in price growth from mid-2014 has been coupled with a parallel expansion of monetary easing. In fact, a Bloomberg gauge now puts Chinese financial conditions at their most accommodative since at least 2003. Another drop in CPI may feed hopes for further stimulus expansion on the horizon.

Finally, the Aussie’s rebuilding correlation with the MSCI World Stock Index (0.65 on rolling 20-day studies) suggests it may find itself dragged alongside sharp swings in risk appetite. Volatility risk comes from on-going deadlock in the negotiations between Greece and its creditors as well as churning speculation about the timing of the first post-QE Fed interest rate hike ahead of the subsequent week’s FOMC sit-down.