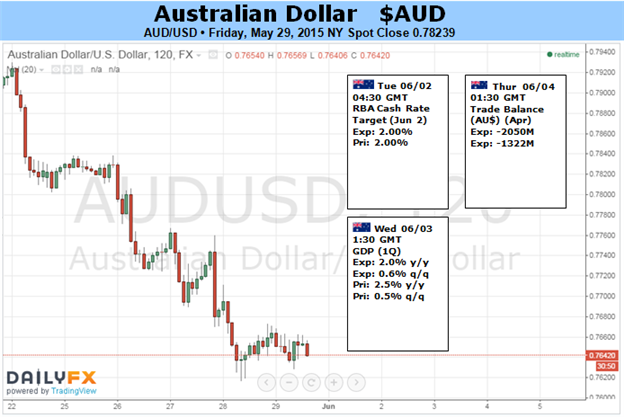 Australian Dollar Volatility Ahead on RBA, China PMI and US Jobs Data

The Australian Dollar faces a week of sharp volatility ahead as the economic calendar fills out with both home-grown and external event risk. On the domestic front, the spotlight is on the RBA monetary policy announcement. Meanwhile, Chinese PMI figures and a string of high-profile US releases culminating in the much-anticipated Employment report will threaten to deliver shocks from the outside.

The RBA is expected to keep the benchmark lending rate unchanged at 2 percent. However, Australian economic news-flow has increasingly underperformed relative to consensus forecasts since the central bank’s early-May sit-down, driving front-end bond yields sharply lower to reflect building speculation about further easing. OIS- and futures-based measures of the priced-in outlook suggest traders are on-board with economists’ on-hold consensus however, meaning a surprise cut has scope to drive the Aussie lower.

Turning to China, narrow improvements on both official and HSBC-compiled variants of May’s Manufacturing PMI readings are penciled in. Realized outcomes on economic data releases have been aggressively deteriorating compared relative to expected ones since early March, suggesting analysts’ models are underestimating the degree of slowdown in the world’s second-largest economy. That opens the door for downside surprises, which could punish the Aussie. China is Australia’s largest trading partner and sluggish performance there may fuel spillover fears.

Finally, in the US, a laundry list of high-profile activity indicators including the manufacturing- and service-sector ISM readings and the Fed’s Beige Book survey of regional economic conditions will pave the way for May’s Employment data. The economy is expected to have added 223,000 jobs, matching April’s outcome. Leading survey data points to a pickup in the pace of job creation however. In fact, the services industry (which accounts for close to three quarters of the employed) is tipped to have seen the strongest pace of hiring growth since June 2014.

If this proves to foreshadow an upside surprise, the Aussie may decline as an up-shift in the markets’ expected timeline for the onset of Federal Reserve interest rate hikes weighs on risk appetite and punishes the sentiment-linked unit. It ought to be noted however that COT positioning data suggests the USD recovery from mid-May has played out against a backdrop of falling speculative net-long exposure. Furthermore, Fed Funds futures have not materially budged from placing a hike no sooner than October even as the greenback soared to a monthly high. This casts doubt on the ability of US news to generate lasting follow-through, at least for now.