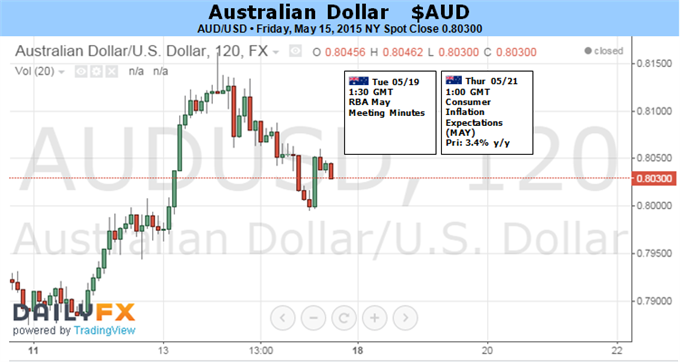 The Australian Dollar continued to push higher last week as expected, with prices working on a sixth consecutive week of gains to make for the longest win streak in over two years. The move has tracked a recovery in benchmark Australian bond yields, pointing to a firming monetary policy outlook as the catalyst behind the advance. In fact, the Aussie rose even after the RBA cut rates this month as the policy statement accompanying the announcement downplayed the likelihood of further easing.

Looking ahead, a relatively quiet domestic economic calendar presents few meaningful inflection points to disrupt momentum and derail recovery. The publication of minutes from May’s RBA sit-down represents the most significant bit of event risk. The document tends to broadly mirror the rhetoric unveiled at the time of the policy meeting. This means that – if anything – the document may encourage entrenchment of a more forgiving outlook and help the Aussie upward.

On the external front, traders will likely take note of May’s preliminary Chinese Manufacturing PMI report from HSBC. The gauge is expected to show the pace of contraction in the factory sector slower for the first time in two months. Chinese economic news-flow has dramatically deteriorated relative to consensus forecasts since early March however, suggesting analysts’ models are overestimating the vigor of the world’s second-largest economy and Australia’s top trading partner. That opens the door for a downside surprise, which could darken the outlook for Australian exporters and weigh on the currency.

The US docket represents another source of external risk. First, the Federal Reserve is due to unveil minutes from April’s FOMC meeting. Janet Yellen and company have argued that weakness seen through the winter is transitory. Indeed, there seem to be striking parallels between the first-quarter slumps in 2014 and 2015. Last year, the markets bet on a slowdown or pause of the QE “taper” after the winter downturn only to be met with steadfast resolve on from the FOMC. A parallel result this time would imply a rate hike around mid-year, not late in the fourth quarter as is now expected. A Minutes document supportive of such a scenario could dent risk appetite and trim the Aussie’s relative yield appeal, sending it lower.

Second, April’s CPI report is set to cross the wires. Expectations call for a downtick on the year-on-year core inflation rate (from 1.8 to 1.7 percent) after three consecutive months of improvement. Leading survey data hints an upside surprise may be in the cards however. The latest PMI report from Markit Economics reveals that output prices in the service sector – the largest part of the overall economy – rose at the fastest rate in seven months in April. If proves to foreshadow a firmer CPI report, Fed tightening bets will have a further reason to rebuild, adding to headwinds facing the Australian unit.