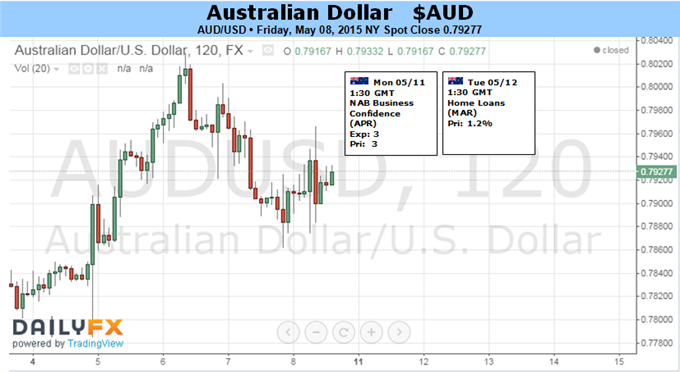 The Australian Dollar looks poised to continue the recovery launched in early April as markets adjust to a newly forgiving monetary policy outlook. The currency shot higher in the wake of last week’s monetary policy announcement despite a widely anticipated 25bps interest rate cut as an upbeat statement accompanying the announcement lowered the probability of further easing on the horizon.

RBA Governor Glenn Stevens and company specifically cited “improved trends in household demand over the past six months and stronger growth in employment”. The decision to cut was chalked up to the forgiving inflation outlook, which the central bank said “provided the opportunity…to reinforce recent encouraging trends”.The Aussie rose alongside front-end bond yields, speaking to the announcement’s supportive impact on policy bets.

As it stands, priced-in policy expectations suggest investors now expect no further easing over the coming 12 months, making for the most supportive one-year forecast since early December 2014. The Australian economic calendar is relatively quiet in the week ahead, suggesting follow-through will have relatively few hurdles on the domestic front.

A significantly diminished correlation between the Aussie and global stock prices hints the risk from standard-issue sentiment-derived crosswinds is likewise limited. With that said, cross-asset linkages can snap back in a hurry in the event of a major market dislocation. Next week’s Eurogroup meeting carries just such risk. The sit-down represents a last-ditch effort to secure funding for Greece before a cash crunch pushes the country toward default and a possible exit from the Euro area. Failure to reach an accord may trigger dramatic risk aversion, sinking the Aussie along with the spectrum of higher-yielding FX instruments.