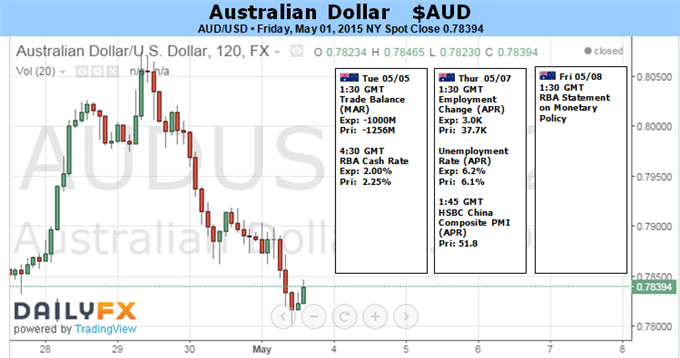 Australian Dollar price action made for a wild ride last week. First, a surge of nearly two percent early in the week produced the largest daily rally in 15 months and took at long-standing range resistance at the 0.79 figure against its US counterpart. Then, in the final 48 hours of the week, a sharp selloff erased the advance and put the currency nearly flat heading into the weekly close.

The tumult tracked swings in Australia’s front-end bond yields, pointing to churning monetary policy bets as the driving catalyst. For better or worse, speculators will see resolution in the week ahead as the RBA delivers its interest rate decision. A mere four of the 28 economists polled by Bloomberg ahead of the announcement forecast rates to remain at 2.25 percent, with the rest calling for a 25 basis point cut to a record-low 2 percent.

The sudden shift in the market’s conviction in the likelihood of on-coming easing seems a bit odd. Core inflation accelerated in the first quarter after sliding through the second half of 2014. Moreover, investors’ implied medium-term price growth expectations have been on the rise, with the 4-year breakeven rate (the difference between real and nominal bond yields) hitting a five-month high last week.

Further still, Australian economic news-flow seems to have started stabilizing relative to consensus forecasts in mid-April after two months of deterioration. Leading economic surveys of manufacturing- and service-sector growth have also shown notable improvement since the beginning of the year. On the external front, a pick-up in 2-year yields has tracked a rebound in iron ore futures since early April, hinting the prospect of stabilizing demand for Australia’s top export commodity has helped buoy policy views.

Traders’ priced-in expectations reflected in OIS rates put the probability of a 25bps RBA cut at the May meeting at 73 percent. This is nearly identical to the 75 percent probability of easing that the markets foresaw ahead of April’s sit-down, when Governor Glenn Stevens and company opted to remain on hold. That marked a six-year low for AUDUSD and saw prices rise as much as 7.2 percent over subsequent weeks. Choosing to keep rates steady this time around may trigger a similar response.