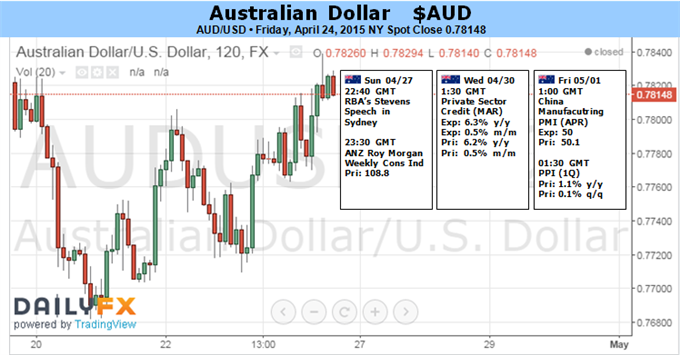 AUD/USD is likely to face increased volatility in the week ahead amid the key developments coming out of the U.S. economy, but fresh commentary coming out of the Reserve Bank of Australia (RBA) may continue to heighten the appeal of the higher-yielding currency as Governor Glenn Stevens appears to be in no rush to further embark on the easing cycle.

The advance U.S. Gross Domestic Product (GDP) report is expected to show the growth rate climbing an annualized 1.0% after expanding 2.2% during the last three-months of 2014, and fears of a slowing recovery may push the Federal Open Market Committee (FOMC) to further delay its easing cycle as a growing number of central bank officials adopt a more cautious tone for the region. With that said, the fresh developments coming out of the Fed’s April 29 interest rate decision may show little evidence for a June rate hike, and the near-term weakness in the greenback may turn into a larger correction should Janet Yellen and Co. show a greater willingness to carry its current policy into the second-half of the year.

Even though the RBA keeps the door open to further reduce the official cash rate, Governor Glenn Stevens may continue to endorse a wait-and-see approach next week at the Australian Financial Review Banking & Wealth Summit amid sticky price growth in the $1T economy. The unexpected uptick in the core rate of inflation may keep the RBA on the sidelines at the May 5 policy meeting and the central bank may soften its dovish tone for monetary policy as record-low borrowing costs raise the risk for housing market imbalance.

In turn, the rebound from earlier this month may spur a test of the March high (0.7987) on the back of dismal developments coming out of the U.S. economy, but the policy divergence should continue to foster a long-term bearish outlook for AUD/USD as the Fed remains on course to raise its benchmark interest rate. Moreover, the aussie remains at risk of facing additional headwinds over the near-term as the RBA retains the verbal intervention on the local currency.