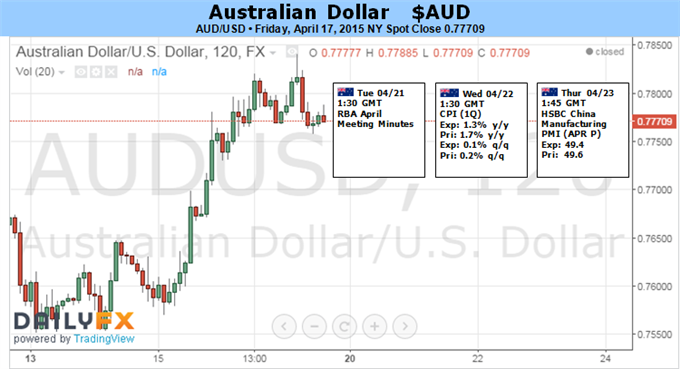 The Australian Dollar is on pace to produce the first series of back-to-back weekly gains in three months. The currency shrugged off losses sustained early in the week on the back of disappointing Chinese trade figures following an impressively strong March jobs report. The decidedly upbeat outcome weighed against RBA interest rate cut speculation. Traders now price in a 58 percent probability of a 25bps cut at next month’s central bank policy meeting, down from 78 percent at the start of the week.

Looking ahead, first-quarter CPI figures will continue to inform investors’ RBA outlook. The benchmark year-on-year inflation rate is expected to decline to 1.3 percent, the lowest in almost three years. As with many of its G10 counterparts however, the RBA has been reluctant to fight short-term price growth weakness. Policymakers have argued that downside pressure will dissipate with rebasing as the impact of last year’s sharp drop in energy costs is unwound, leaving medium-term trends targeted by central banks intact.

With that in mind, traders will probably focus on the “trimmed mean” CPI measure, a metric that aims to strip out up- and down-side price growth volatility extremes to get at the core inflation trend. This is expected to hold at 2.2 percent, unchanged from the fourth quarter. That would mark a break from disinflation seen in the second half of 2014, which may further reinforce perceptions that the RBA is in no hurry to top up stimulus and boost the Australian unit.

Chinese news-flow represents another significant inflection point. The Aussie overlooked dismal industrial production figures from the East Asian giant last week, with the release seemingly overshadowed by a concurrently published first-quarter GDP report that printed in line with forecasts. The week ahead will bring a timelier measure of the business cycle in Australia’s top export market via the flash estimate of April’s HSBC Manufacturing PMI measure. Accelerated contraction in factory-sector activity is expected, which may cap the Aussie’s upside potential.