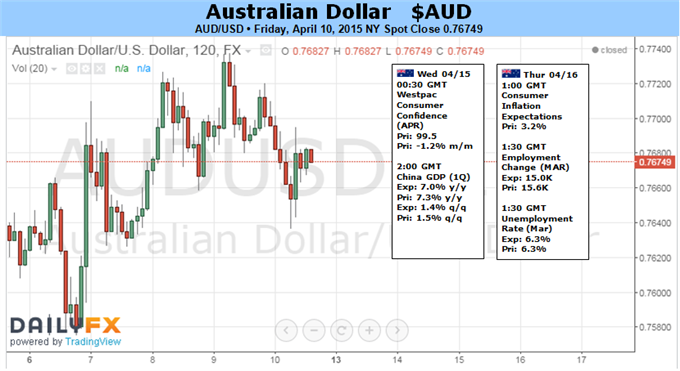 The Australian Dollar snapped a two-week losing streak after the RBA opted against another interest rate cut at April’s monetary policy meeting. The central bank was unmistakably clear about its bias however, saying “further easing…may be appropriate over the period ahead” and pledging to “assess the case for such action at forthcoming meetings”.

This makes for a data-sensitive environment going forward as traders weigh up news flow to see when RBA Governor Glenn Stevens and company might pull the trigger. In the week ahead, the March set of employment figures will be in the spotlight. The economy is expected to have added 15,000 jobs last month while the unemployment rate is tipped to have remained at 6.3 percent.

Leading survey data points to a significant slowdown in service-sector hiring in March while employment in manufacturing continued to contract (albeit at a slower pace). With close to three quarters of those working doing so on the services side, this is an ominous sign. Furthermore, Australian data outcomes have increasingly underperformed relative to consensus forecasts recently, hinting analysts’ models are overestimating the economy’s vigor and raising the threat of a downside surprise.

A disappointing jobs report may help stoke bets on an RBA interest rate cut when policymakers reconvene in May. As it stands, the markets’ priced-in expectations assign a 70 percent probability to a 25 basis point reduction. A similar degree of conviction prevailed ahead of April’s meeting, only to be proven wrong. This means a set of employment figures that builds investors’ certitude is likely to have market-moving potential despite already elevated easing speculation, weighing on the Aussie.

Chinese news-flow may amplify any dovish shift in the markets’ RBA outlook. The East Asian giant is expected to report that year-on-year GDP growth slowed to 7 percent in the first quarter of 2015, marking the weakest reading since the post-crisis trough in the first three months of 2009. This bodes ill for Australia, whose economic resilience in recent years has largely relied on Chinese demand for the output of its mining sector.

The Australian Dollar’s down move since April 2013 has tracked deteriorating expectations for 2015-16 Chinese GDP growth (as tracked by a survey of economists polled by Bloomberg). A parallel drop in Australia’s front-end bond yields bolsters the narrative, suggesting traders are betting that deteriorating export prospects will undermine overall growth. This will push the RBA into action, denting the Aussie’s yield appeal. A soft Chinese growth print will probably feed such speculation.