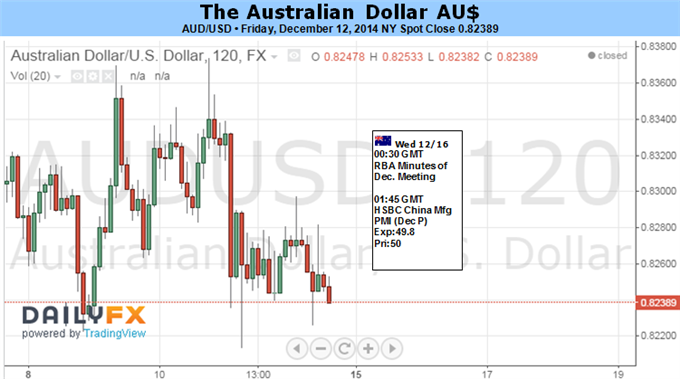 Australian Dollar May Drop Out of Range on FOMC, RBA Minutes

The Australian Dollar finds itself torn between conflicting forces as year-end liquidation on trends dominating markets in 2014 gathers momentum. Swelling risk appetite – embodied by a relentless push upward by the S&P 500 – and a firming US Dollar have been defining themes in the past year. Profit-taking on these trades ahead of the transition to 2015 has produced a parallel downturn in the greenback and the benchmark stock index.

This dynamic carries conflicting implications for AUDUSD. On one hand, the prices are being offered support by a market-wide unwinding of long-USD exposure. On the other, the shedding of risk-on exposure is putting downward pressure on the sentiment-geared Aussie Dollar. Not surprisingly, this produced relative standstill, with prices locked in a narrow range and waiting for guidance even as notable reversals are recorded elsewhere in the anti-USD space.

A shift in the relative monetary policy outlook may break the deadlock in the week ahead. Shifting expectations over recent weeks have delivered a priced-in G10 forecast that sees the RBA as one of the most dovish central banks in 2015. Indeed, with OIS rates implying at least one interest rate cut in the coming 12 months, the Australian monetary authority leads on the conventional policy easing front. Only the BOJ and the ECB may edge out Glenn Stevens and company for the most-dovish crown, and then only via expansions of non-standard measures.

This stands in stark contrast with the policy trajectory at the Federal Reserve. Markets are betting on at least one rate hike in 2015 and have been flirting with the possibility that US officials will be able to squeeze in two of them before year-end. US economic news-flow appears to be gathering steam relative to consensus forecasts once again. Data from Citigroup suggests that, on the whole, realized outcomes are now outstripping expected ones by the widest margin since mid-September. This has already encouraged markets to bet on the sooner arrival of the first post-QE rate hike. Next week’s FOMC policy announcement – this time complete with an updated set of economic projections and press conference from Chair Janet Yellen – may see the timeline shorten further.

On the domestic front, minutes from December’s RBA meeting will be in the spotlight. The markets were not meaningfully swayed against betting on a 2015 rate cut by the neutral statement that emerged out of that sit-down. This suggests that anything but a convincing hawkish rhetorical shift – an outcome that seems overwhelmingly unlikely even on a relative basis – will keep bets on a 25-75 basis point pro-USD move in the policy spread comfortably in place. Taken together with guidance from the Fed, that may tip the scales to produce a bearish break out of consolidation for the Aussie.