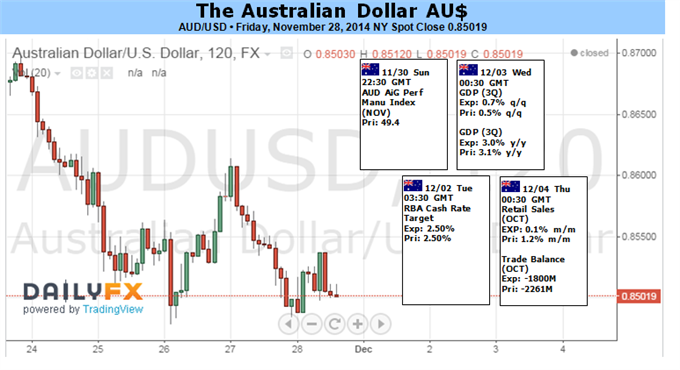 The Australian Dollar plunged to a fresh 2014 low against its US counterpart during the week as volatility levels rose and its yield advantage detiorated. A light local economic docket left the Aussie with little guidance, yet the RBA’s Lowe delivered the currency a blow when he suggested the door was open to further rate cuts. Additional pressure was potentially put on the pair by a significant slump for some of Australia’s key export commodities.

Looking ahead; the first week of December is littered with top-tier domestic data as well as the last RBA decision for the year. On balance local data has softened and this trend may prevail with upcoming trade balance, retail sales and building approvals data. However economists’ expectations point to a relatively robust third quarter growth reading of 3.1 percent year-on-year for the Australian economy.

At this stage it would likely take a more material deterioration in local economic data over an extended period to catalyze a change in the RBA’s rhetoric within their policy statement. This suggests that for the time-being another status-quo Statement could prevail at the final meeting for the year. This in turn could leave the AUD to take its cues from elsewhere.

Heightened implied volatility levels in the FX market remain a significant threat to the AUD. The CVIX measure jumped to a 2014 high over the past week – indicating traders are pricing in some significant movements amongst the major currencies over the near-term. As noted in recent reports such expectations bode ill for the high-yielding currencies like the Aussie. This threat has been amplified by a deterioration in the AUD’s relative yield advantage against its major counterparts. This includes a slide in the Aussie 10 year bond yield spread to Treasuries to its lowest since 2006.

Net short positioning amongst speculative futures traders is roughly half of what was witnessed in mid-2013. This suggests the AUD short trade still has some room left before becoming ‘crowded’. Downside risks for the AUD/USD pair are centered on the July 2010 trough near 0.8320. While a daily close back above former support-turned-resistance at 0.8540 would be required to signal a potential base. For insights into the US Dollar side of the equation read the weekly forecast here.