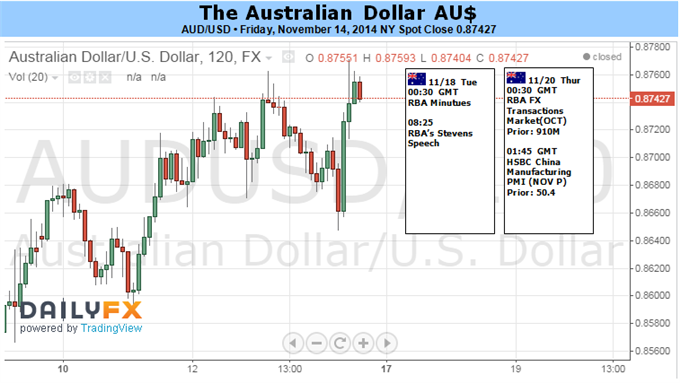 AUD Scope For A Recovery Limited By Diminished Carry Appeal

The Australian Dollar has witnessed some surprising resilience over the past week with it posting modest gains against most of its peers. The driving force behind the small advance may have been a general drive to yield, given similar gains were witnessed for risk sentiment proxies (S&P 500). Meanwhile, regional economic data once again proved uneventful for the commodity currency.

The coming week brings the release of the RBA’s November Meeting Minutes. The decision itself proved a non-event for the AUD and given the fairly well broadcast views from the Board, the Minutes are unlikely to deliver anyrevelations for traders. Similarly, upcoming Chinese data may see another muted response from the currency since it would likely take a significant deterioration over an extended period to generate a response from RBA officials. This could leave the AUD to continue to seek guidance from sources outside of domestic monetary policy expectations.

The potential for general positive risk sentiment to act as a sustainable fuel source for the Aussie may be limited. This is given implied volatility levels are near their 2014 highs, suggesting traders are anticipating some strong swings amongst the major currency pairs. This in turn may detract from the carry appeal of the Aussie and could limit the scope for further gains.

Downside risks for AUD/USD are centered on the pair’s recent lows near 0.8540, while gains are likely to encounter selling pressure at the 0.8880 ceiling. For insights into the US Dollar side of the equation read the weekly forecast here.