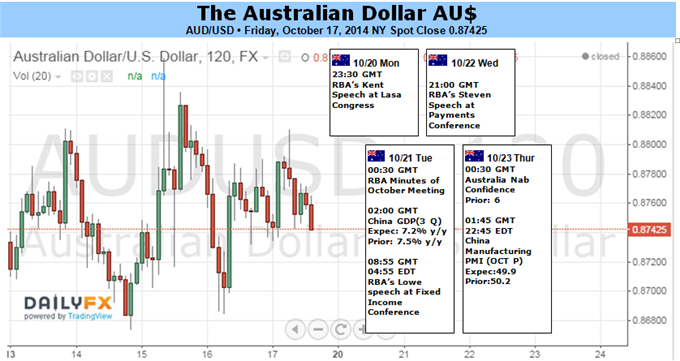 The Aussie may be in store for another wild week with shifts in general market sentiment, local CPI figures and top-tier Chinese data to offer the currency guidance.

The Australian Dollar had another rollercoaster week against its peers as shifts in global risk sentiment swung the high-yielding currency wildly during intraday trade. Meanwhile, medium-tier regional economic data saw a lackluster response from the AUD amid well-anchored RBA policy bets.

Looking to the week ahead, Q3 CPI figures headline the Australian economic calendar. Another deviation from expectations holds the potential to catalyze knee-jerk volatility for the currency. Yet follow-through is likely to prove difficult given it would take a significant surprise to materially alter rate expectations.

Meanwhile, the RBA’s October Meeting Minutes and a speech from Governor Stevens (focused on the Australian payments system) are unlikely to offer fresh insights into policy makers’ thinking. In turn these may prove uneventful for the AUD.

Elsewhere in the region, a raft of top-tier economic data from China is on the docket. The figures from the Asian giant could do little to dent steadfast Reserve Bank bets. Yet disappointing data from the world’s second largest economy may have the potential to feed mounting concerns over global growth and fan risk-aversion, which in turn would be a negative for the Aussie.

The primary threat to the high-yielding currency remains the prospect of a continued surge in volatility, which according to some measures is at its highest since February. While many Aussie carry trades may have already been unwound short positioning in the futures markets remains well off the extremes of last year. This suggests there is plenty of room in the short trade before it begins to look ‘crowded’.

Sellers appear intent on keeping the AUD/USD capped below the 89 US cent handle, leaving the risk focused on the 0.8660 barrier for the pair. If broken on a ‘daily close’ basis it could open the next leg lower to the July 2010 low near 0.8320. For more on the US Dollar side of the equation read the weekly forecast here.