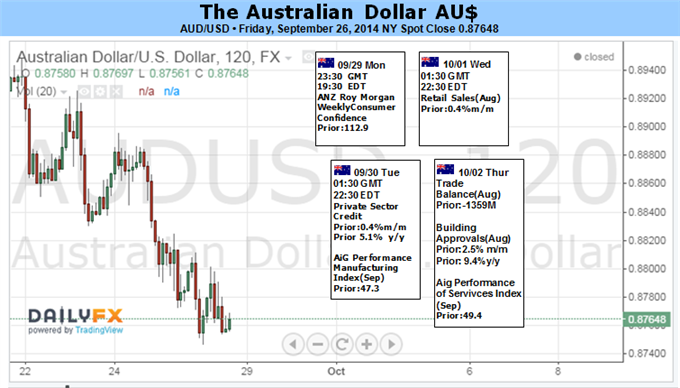 The Australian Dollar faced another week of heavy selling pressure as traders likely unwound carry trades amid of a surge in market volatility. Further, a void of major domestic economic data left the currency lacking bullish fundamental cues to catalyze a recovery.

The coming week brings a raft of local releases including building approvals, trade balance data and retail sales figures. Yet based on recent RBA rhetoric these are unlikely to materially shift policy expectations. This suggests the potential impact on the Aussie from the figures may be muted. In turn the AUD may be left looking elsewhere for sources of support.

Also on the docket will be the release of the official and final HSBC manufacturing figures from Australia’s largest trading partner, China. The upside surprise to last week’s preliminary PMI data failed to leave a lasting positive impact on the currency. This suggests there is a high threshold for Chinese data to generate a rebound for the AUD.

The key risk facing the Aussie remains the prospect of a mass exodus from carry trades. A rebound in measures of implied volatility suggests traders are anticipating large swings amongst the major currencies. This detracts from the attractiveness of the Aussie’s comparative yield advantage and leaves it vulnerable to further weakness.

Traders have their sights set on the 2014 lows for AUD/USD near 0.8660. While the magnitude of recent declines may open the door to some profit-taking, this may slow its descent rather than prompt a reversal. Refer to the US Dollar outlook for insights into the USD side of the equation. – DDF