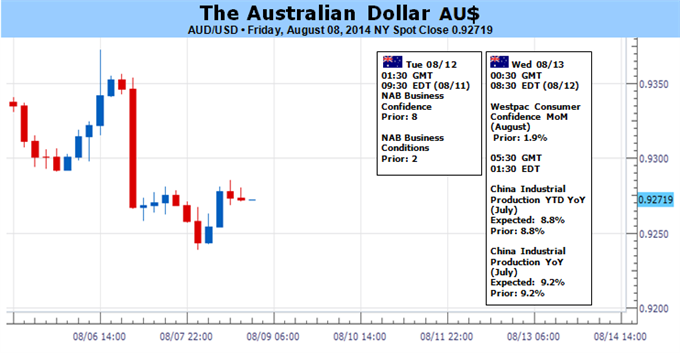 The Australian Dollar extended its recent declines over the past week on the back of broad-based risk aversion and disappointing domestic data. Heightened geopolitical turmoil sapped demand for the high-yielding currency as traders flocked to the perceived safety of the Yen and US Dollar. Additional pressure was put on the currency following an unexpected jump in the local unemployment rate to a 12 year high.

Looking ahead, if we see tensions surrounding the Middle East or Ukraine escalate, the Aussie could face further weakness in the short-term. However, we have witnessed several flare-ups of geopolitical tensions in recent months, which have failed to leave a lasting impact on the currency. This suggests that if the swell settles from the most recent storm of volatility, the currency may be afforded some breathing room.

Consumer and business confidence figures are the only noteworthy pieces of domestic data on the calendar over the coming week. The leading indicators for the health of the local economy have reflected some resilience in recent months, yet remain subdued. Another lackluster set of readings would further reinforce the need for highly accommodative RBA policy to remain in place.

Despite recent local data softening the Reserve Bank is likely to retain its preference for a ‘period of stability’ for rates over the near-term. Based on recent rhetoric from the Board it would take a material deterioration in incoming economic indicators to re-open the door to rate cuts. At the same time, policy tightening is likely to be delayed. Indeed swaps-implied expectations for rates slipped back into negative territory over the past week. This does little to raise the carry appeal of the currency and leaves the Aussie in a precarious position.

Upcoming Chinese Retail Sales and Industrial Production data will also be on the radar for Aussie traders. Incoming data from the Asian giant has been relatively positive on balance, which has eased concerns over a deceleration in economic growth. If the next week’s figures continue this recent trend it could ease some of the selling pressure facing the AUD.

AUD/USD is drawing closer towards the 92 US cent handle, which has been a line in the sand for the pair since late March. If broken, it would set the stage for a sustained decline to the psychologically-significant 0.9000 handle. Refer to the US Dollar outlook for insights into how the USD side of the equation may influence the pair.