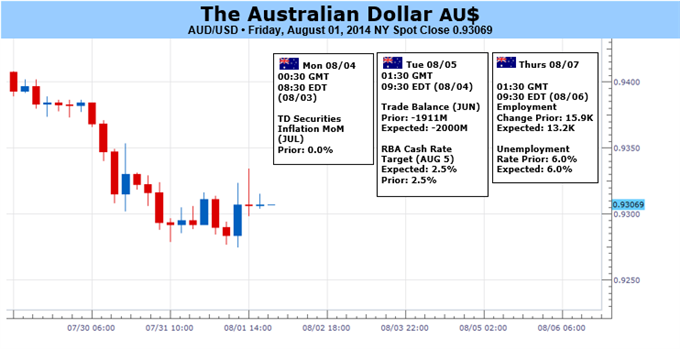 Australian Dollar May Bounce Before Selling Pressure Builds in Earnest

The Australian Dollar faced heavy selling pressure last week, with prices dropping through the bottom of a range that contained price action since the beginning of June. The force behind the move lower came from external factors: an impressively strong second-quarter US GDP figure and an easing of the FOMC’s concern about persistently low inflation hinted Janet Yellen and company may move swiftly to raise rates after the QE3 asset purchase program is wound down in October.

That boosted the yield profile of the US Dollar, sending it higher against all of its key counterparts. It likewise undermined risk appetite built upon a foundation of monetary stimulus. That bode doubly ill for the Aussie, sending the currency down nearly a full percentage point against its US namesake to yield the worst performance in ten weeks.

US economic data cut the selloff short just as it had sparked it. Friday’s release of the US jobs report proved disappointing, with a 209,000 rise in nonfarm payrolls falling short of economists’ expectations calling for a 230,000 increase. That poured to cold water on swelling Fed tightening speculation, allowing the Aussie to reclaim a bit of lost ground. More of the same may be in store early next week as markets continue to digest the balance of last week’s news-flow to recalibrate the priced-in policy outlook.

The recovery may prove short-lived however as domestic factors return to the spotlight. The RBA monetary policy announcement seemingly ought to take top billing, but officials are unlikely to offer up anything unheard of in recent months. Another restatement of the commitment to hold rates unchanged for the foreseeable future may force a pause in the Aussie’s recovery, but the likelihood of another strong push lower will probably hinge on July’s employment figures.

A net jobs gain of 13,200 is expected, marking a slowdown from the previous month’s 15,900 increase. Furthermore, Australian economic data has increasingly underperformed relative to consensus forecasts since mid-April, opening the door for a downside surprise. Such a result is likely to extend the perceived length of the standstill on the monetary policy front, undermining yield-based support for the Aussie and forcing prices lower in earnest.