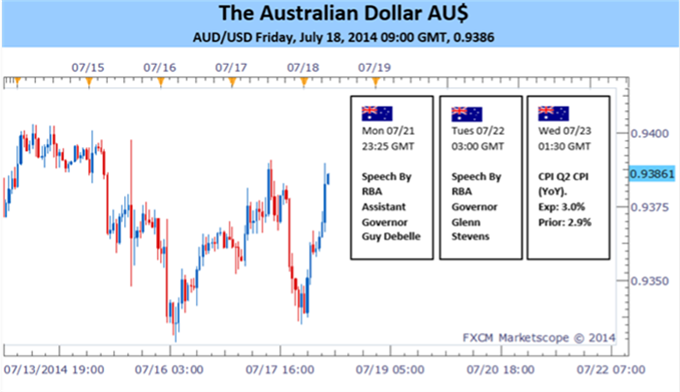 AUD Braces For Jawboning From Stevens And Quarterly Inflation Data

The Australian Dollar’s consolidation continued over the most recent week with AUD/USD remaining within its narrow range between 0.9210 and 0.9440. A status-quo set of Minutes from the RBA and positive Chinese second quarter growth figures failed to inspire the Aussie bulls. While a sell-off on heightened geopolitical tensions proved to be short-lived, with the currency bouncing back during Friday’s trading. Over the week ahead, two key themes are likely to continue to offer the Aussie guidance; policy expectations and risk appetite.

On the risk-appetite front; geopolitical turmoil carries the potential to put pressure on the risk-sensitive currencies like the Aussie. There is considerable uncertainty over whether the flare-up between Israel and Hamas, as well as tensions in Eastern Europe could escalate, which could leave traders hesitant to move back to the Aussie. Investors’ reactions to the latest developments suggests that the market is highly sensitive to outside shocks at present. If either situation were to intensify, it could lead to an unwinding of AUD carry trade positions built up over recent months.

However, we have witnessed several of these geopolitical shocks this year, which have ultimately failed to leave a lasting impact on sentiment. When the dust settles from the latest flare-up traders could again be tempted to return to the Aussie for its yield appeal.

Next week’s domestic CPI data and speeches by RBA officials could feed the policy expectations theme. A surprise second quarter inflation reading may see a knee-jerk reaction from the currency, however given a shift in the rate outlook remains unlikely at this stage, follow-through could prove limited.

Similarly, another attempt at jawboning the Aussie lower from Stevens may fail to leave a lasting impact on the unit. In recent addresses the RBA Governor has simply been delivering the central bank’s view that the currency is overvalued, and at this stage remains unwilling to take action such as intervention to put pressure on the AUD. For views on the US Dollar side of the AUD/USD equation, refer to the US Dollar outlook available here.