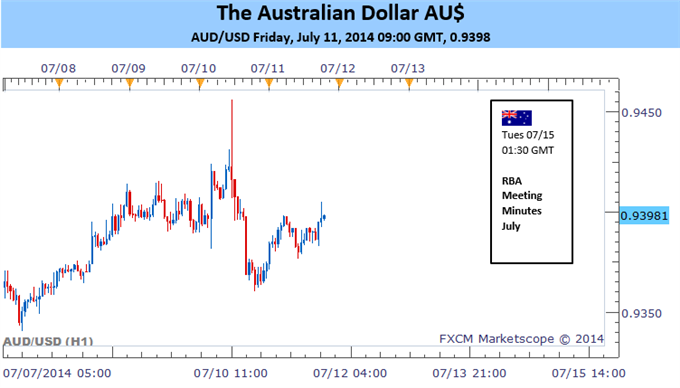 The Australian Dollar finished relatively flat for the week despite several bumps along the way. Domestic data presented a mixed bag with soft employment figures offsetting some positive leads from a rebound in consumer confidence and business conditions data earlier in the week. Two key themes are likely to continue to offer the Aussie guidance over the week ahead; policy expectations and risk appetite.

On the policy front the RBA July Meeting Minutes due on Tuesday take center stage amid a light economic docket for the week. The central bank has held steadfast in its rhetoric suggesting a “period of stability” remains the best course for rates over the near-term. Although recent economic news-flow has disappointed relative to expectations, a more material deterioration would likely be required to cause the central bank to shift its stance. In the absence of a dovish tone in the communique, the Australian Dollar may be afforded some breathing room.

The Aussie’s relative yield advantage over its US counterpart continues to offer the currency a source of support. Anemic implied volatility levels suggest traders are pricing in a low probability of a major economic disruption occurring over the near-term. If this environment persists over the coming week, carry trade demand for the AUD could keep the currency elevated.

Additional guidance for the Australian Dollar is likely to stem from a string of top-tier Chinese economic releases including second quarter GDP, Retail Sales, and Industrial Production figures. We have witnessed a turnaround in economic data from the Asian giant over the past month, which has helped alleviate concerns over a further deceleration for growth. A strong second quarter GDP print would be a positive for the Australian economy, via a strong trade link, and would offer a source of support to the AUD. For views on the US Dollar side of AUD/USD equation, refer to the US Dollar outlook available here.