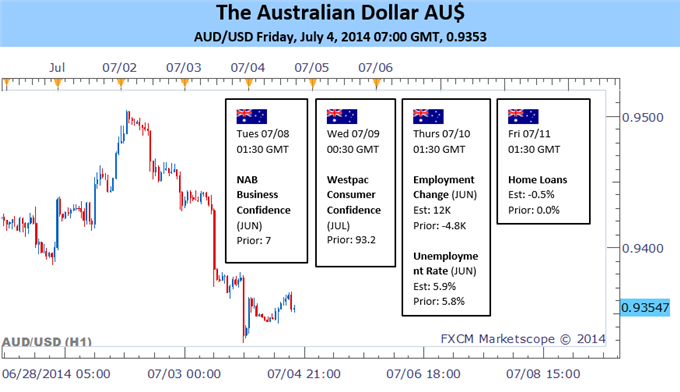 Wild Week For The Aussie

After hitting a fresh 2014 high during Tuesday’s session and briefly probing above the 95 US cent handle, the Australian Dollar ended the week as the worst performer against its US counterpart. While a dismal set of trade balance figures took the wind out of the currency’s sails, the real blows came from a fresh round of AUD jawboning by RBA Governor Glenn Stevens and a bumper set of US Non-Farm Payrolls data. The sharp decline on Thursdays was the largest pip value fall for the AUD/USD this year.

June employment figures headline the docket for local data over the week ahead with economists tipping a tick higher in the unemployment rate to 5.9 percent. An upside surprise to the jobs added figure or unanticipated decline in the headline unemployment rate could yield a spike higher for the Aussie. However, follow-through may prove limited, given the Reserve Bank of Australia is unlikely to shift their policy preference until more consistent signs of progress in the labor market are witnessed.

Local Consumer and Business Confidence figures as well as Housing Finance data round out the noteworthy economic data on tap for the week. While consumer sentiment has sagged over the first half of the year, business confidence has shown some surprising resilience. On balance the leading indicators paint a patchy picture of the health of the Australian economy, which reinforce the notion that the cash rate is set to remain on hold over the near-term.

One of the important themes that continues to offer the high-yielding currencies their bearings is the persistent low volatility environment, which has raised the appeal of the carry trade. Implied volatility in the FX market (measured by CVIX) hit a fresh low this week, suggesting traders are pricing in a low probability of a major economic disruption occurring in the near-term, which may continue to lure traders to the Aussie. 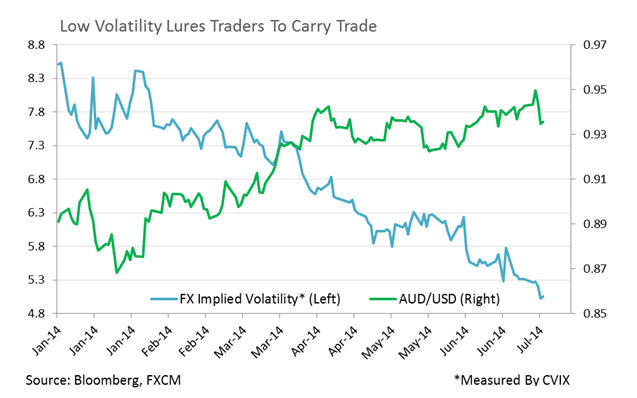 However, as investors have continued to pile into the long Aussie trade over the past several months, the currency’s yield advantage over its US counterpart has weakened considerably. The Australian 10 year bond spread narrowed to its lowest since October 2006 on Friday (see chart below). This makes the carry trade a relatively less attractive proposition, which may in turn reduce investor’s appetite for the Aussie. 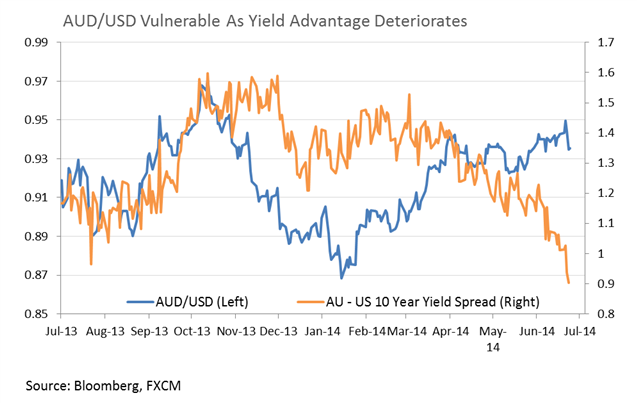