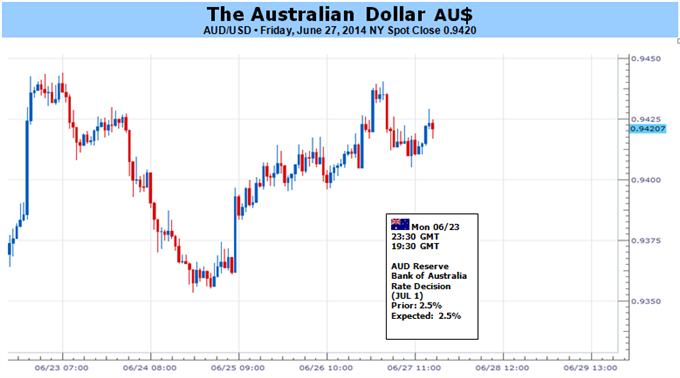 Domestic policy returns to focus for the Australian Dollar in the week ahead as all eyes turn to the RBA interest rate decision. Economists’ expectations suggest Governor Glenn Stevens and company will leave the baseline lending rate unchanged yet again. The markets seem to agree, with a Credit Suisse gauge tracking the priced-in policy outlook putting the probability of an adjustment at a mere 1 percent. That puts the spotlight on the statement accompanying the announcement, with traders combing through the document’s verbiage to tease out the central bank’s thinking on where it intends to go in the months ahead.

For the past two months, the combination of the post-meeting RBA statement and the subsequent release of minutes from the sit-down have left investors with a dovish lean in their forward outlook. The statements themselves have struck a fairly neutral tone, steadfastly arguing for a period of stability in benchmark borrowing costs. The minutes have added some dovish color, reflecting a central bank uneasy about a return to tightening. That is not surprising: Australian economic news-flow has dramatically deteriorated relative to consensus forecasts since mid-April, warning against taking any steps that might make matters worse.

July’s meeting seems likely to offer more of the same. While the economy continues to look fragile, it does not seem to have become substantially more so since policymakers convened in June. That opens the door for the status quo to remain in place. Interestingly, the absence of a change in the RBA’s posture may still carry important directional implications for the Aussie. Having previously moved tracked closely with Australia’s 2-year bond yield, the currency has increasingly diverged in recent weeks. While the Australia-US front-end yield spread has moved sharply lower, AUD/USD has continued to oscillate in a range loosely defined between the 0.92 and 0.95 figures.

On balance, this seems to leave the door open for a correction. Moving past the RBA announcement without material changes to the landscape may put a spotlight on the increasingly disconnect between the exchange rate and relative policy bets, forcing the Aussie to correct downward. The move may be amplified by a set of high-profile US data releases. Manufacturing- and service-sector ISM figures as well as the closely-monitored Nonfarm Payrolls reading are in the spotlight. Expectations call for only nominal changes on both fronts, keeping the present setting of investors’ Fed policy bets broadly intact. Cumulatively, the emerging narrative tells of a US central bank that is cautiously reducing stimulus and an Australian one that isn’t, prodding investors to take heed of the shifting landscape and respond accordingly.