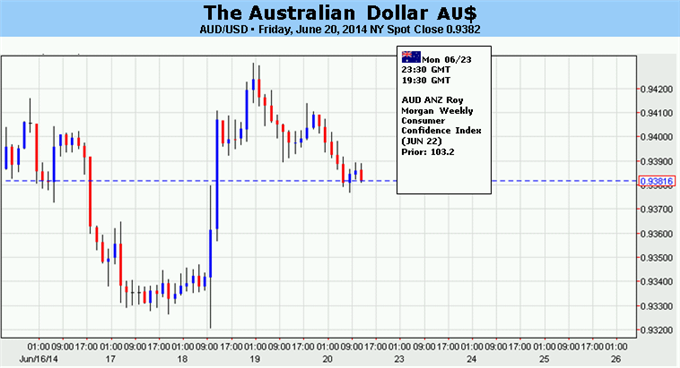 The Australian Dollar stumbled after three consecutive weeks of gains, failing to mount a sustained push above 0.94 figure against its US counterpart yet again. As we expected, minutes from June’s RBA meeting proved to be a major hurdle as policymakers added color to a seemingly status-quo policy announcement with decidedly dovish rhetoric. This led the Aussie sharply lower as rate hike bets unwound, with a Credit Suisse gauge tracking investors’ priced-in 12-month policy outlook dropping to the lowest level in nearly three weeks.

Downside follow-through proved limited however, with the Aussie mounting a swift recovery in the aftermath of the FOMC policy announcement. Investors looked beyond a generally upbeat statement from the rate-setting committee and an even-handed performance from Chair Yellen at her quarterly press conference to focus on a sharp downgrade in officials’ 2014 GDP growth outlook. The Fed’s central projection now sees the upper bound on growth this year at 2.3 percent, an dramatically lower number than the 3 percent estimate given in March. Traders seemed to interpret this to mean that interest rate hikes are becoming an increasingly distant prospect following the end of QE3 asset purchases expected in the fourth quarter.

Such sentiments may be short-lived. A cutback in 2014 growth bets reflecting the widely-known slump in the first quarter should not to be surprising for market participants at this point. Investors also ought to find it telling that the Federal Reserve has conspicuously opted not to alter the policy normalization process after the downturn, arguing the soft patch was a transitory aberration rather than a real threat to recovery. Put simply, this means the 2014 GDP growth downgrade reflects old news rather than a new piece of the puzzle that is likely to alter the course of policy going forward. On the contrary, a particularly chipper tone in the policy statement and a hawkish shift in baseline rate hike expectations are far more noteworthy.

The week ahead will bring plenty of opportunities for the markets to reconsider their initial FOMC reaction. A slew of economic indicators including home sales, consumer confidence, durable goods orders, and PMI figures are on tap. The trend in US economic news-flow marked an important upturn relative ton consensus forecasts in early April and has broadly (if unevenly) continued to improve since. More of the same from upcoming releases may show investors they ought to be looking ahead to shape their Fed outlook, not dwelling on backward-looking reflections of weakness that policymakers have already dismissed. Scheduled commentary from regional Fed Presidents Plosser, Williams, Lacker and Bullard may help this cause. This means post-FOMC moves across the asset class spectrum may be swiftly unwound, sending the Aussie lower in the process.