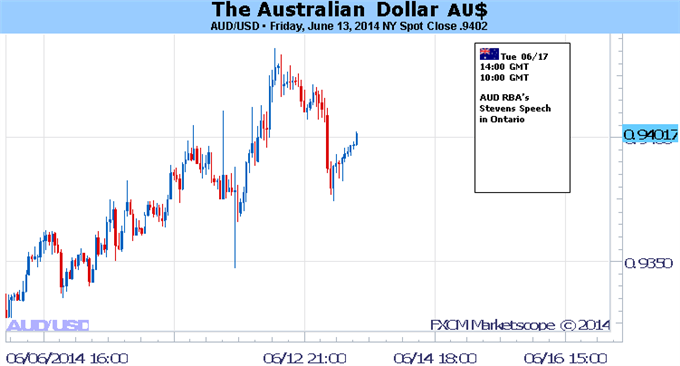 The Australian Dollar managed a strong showing last week, rising to a two-month high just below the 0.95 figure against its US counterpart. The advance tracked an improvement in monetary policy expectations, with a Credit Suisse gauge tracking the priced-in 12 month outlook rising to the highest level since mid-May. High-profile event risk on the domestic and the external fronts in the week ahead threatens to undermine the rally however.

The spotlight initially falls on minutes from June’s RBA policy meeting. The policy announcement struck a familiar tone, arguing for a period of stability in interest rates. With that in mind, traders will look to the text of the minutes for added color, attempting to gauge how long the standstill is likely to last and the direction that policy is likely to take thereafter. Minutes from a likewise status-quo flat rate decision in May proved telling, revealing a dovish lean in the Bank’s posture and sending the Aussie lower. Australian economic data dramatically deteriorated relative to expectations between the May and June meetings (according to data from Citigroup), warning that a similar dynamic may play out again.

Later in the week, the focus returns to the Federal Reserve the rate-setting FOMC committee convenes for its policy meeting. This outing takes on particular significance in that it will be accompanied by the release of an updated set of policymakers’ economic forecasts as well as a press conference from Fed Chair Janet Yellen. As we’ve discussed previously, the fate of the Fed’s effort to “taper” QE asset purchases with an eye to end the program this year – paving the way for interest rate hikes – has been a formative catalyst for the markets this year.

US economic news-flow has broadly improved relative to consensus forecasts since early April but a string of disappointing releases over the past three weeks have rekindled doubts about the strength of the recovery from a dismal performance in the first quarter. Indeed, the US Dollar has come under renewed selling pressure as traders scaled back bets on swift Fed policy normalization, putting the greenback’s multi-year uptrend in jeopardy. For their part, FOMC officials have adamantly maintained that the first quarter was a hiccup in an otherwise supportive environment. If that sentiment is reflected in an upgraded set of economic forecasts and/or an upbeat Yellen presser this dynamic may be overturned, undermining the Aussie’s perceived yield advantage and sending it lower anew.