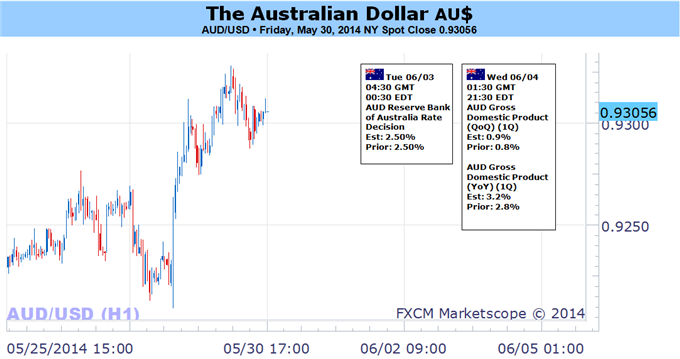 Australian Dollar to Look Past RBA, Focus on Key US Data

On the domestic front, the spotlight is on a policy announcement from the Reserve Bank of Australia. The central bank is expected to keep the benchmark lending rate unchanged at 2.50 percent. That will put the focus on the statement released following the sit-down.

A dovish tone in minutes from May’s meeting undermined speculation about forthcoming interest rate hikes, sending the currency lower. Australian economic data has increasingly underperformed relative to market expectations since then, suggesting Glenn Stevens and company will be in no hurry to change their tune.

Meanwhile, GDP figures are set to show the pace of output growth accelerated in the first quarter and China’s PMI data is expected to reveal a pickup in the pace of factory-sector activity in May. That is likely to keep stimulus expansion bets at bay, helping to cement the status quo wait-and-see setting of monetary policy both in practice and in the minds of investors.

Sizing up the macro landscape, a critical mass of high-profile event risk informing the outlook on Federal Reserve policy looms ahead. As we’ve discussed previously, the fate of the FOMC’s effort to “taper” QE asset purchases with an eye to end the program this year – paving the way for interest rate hikes – has been a formative catalyst for the markets this year.

While last week’s US GDP data revealed more dismal first-quarter performance than was previously expected, Janet Yellen and her colleagues on the policy-setting FOMC committee have regularly dismissed the first three months of the year as a temporary soft patch. US economic data began to steadily improve relative to consensus forecasts in early April, seemingly supporting the central bank’s position.

Manufacturing- and service-sector ISM figures, the Fed’s Beige Book survey of regional economic conditions and the obsessively monitored Nonfarm Payrolls report are all due to cross the wires in the coming days. Continuation of the supportive trend in US news-flow may help scatter any lingering doubts about the approaching end of asset purchases and subsequent tightening. That may narrow the Aussie’s perceived yield advantage and drive broader risk aversion, all of which bodes ill for the currency. -IS