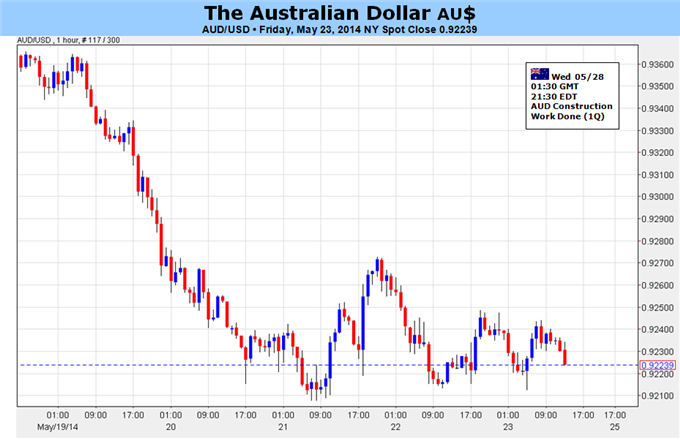 The Australian Dollar fell by the most in four months against its US counterpart last week after a dovish tone in minutes from May’s RBA meeting weighed dented interest rate hike bets. A lull in homegrown event risk in the week ahead puts the onus on external catalysts, with the spotlight on investors’ evolving Federal Reserve policy outlook.

A central theme driving markets since the beginning of the year had been the disparity between soft US economic data and the Fed’s commitment to continue “tapering” its QE stimulus program. That encouraged markets to speculate that lackluster economic performance will push the central bank to scale down or abandon reducing the size of its asset purchases.

For its part, the Fed has steadily reduced its cash injections by $10 billion/month since the cutback process was initiated in December. Fed Chair Janet Yellen and her colleagues on the policy-setting FOMC committee argued that the downturn in the first quarter was transitory and didn’t warrant a change of course. The markets were duly skeptical of this position absent hard evidence to support it.

This may now be changing. The tone of US economic news-flow appears to have marked an important turn in early April, with data from Citigroup showing that outcomes have been consistently improving relative to expectations since. That hits that analysts are underestimating the resilience of US recovery, opening the door for upside surprises.

The week ahead will see a diverse range of US economic indicators cross the wires. Durable Goods Orders, Consumer Confidence, Pending Home Sales, Personal Income and Spending as well as revised first-quarter GDP figures are all on tap. On the commentary front, a speech from incoming Cleveland Fed President Loretta Mester is a standout. Mester will take the place of Sandra Pianalto on the FOMC starting June 1 and markets will keen to evaluate where she stands.

Unencumbered speculation about the end of QE and the beginning of interest rate hikes thereafter sparked liquidation across the spectrum of risky assets last year, when then-Chairman Ben Bernanke first hinted at stimulus reduction. Increasingly upbeat US economic data against a backdrop of pro-taper Fed rhetoric threatens to re-ignite this dynamic. As one of the higher yielders in the G10 FX space, the Australian Dollar is highly sensitive to broad-based risk aversion, meaning another mass exodus from sentiment-geared assets stands to hurt the currency. -IS