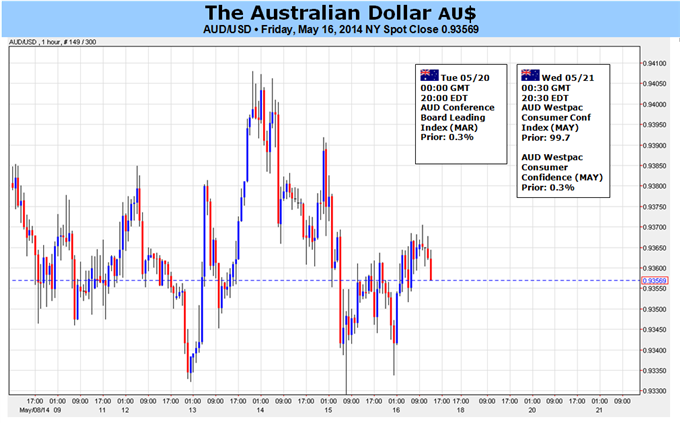 Another quiet week on the Australian economic data front keeps the spotlight on external factors, with the evolving outlook for Federal Reserve monetary policy in focus. A central theme driving markets since the beginning of the year has been the disparity between soft US news-flow and the Fed’s commitment to continuing to “taper” its QE effort. That encouraged investors to suspect that the central bank may pause or abandon the process of reducing the size of its monthly asset purchases.

For its part, the Fed has steadfastly reduced the pace of balance sheet expansion by $10 billion/month since the cutback process was initiated in December. Fed Chair Janet Yellen and her colleagues on the rate-setting FOMC committee argued that the slowdown in US economic performance in the first quarter was transitory and didn’t warrant a change of course. The markets were duly skeptical of this position absent hard evidence to support it. This may be changing at last.

A Citigroup index tracking how US economic releases stack up relative to expectations found a bottom in early April and started to reverse upward, finishing last week at the highest level in three months. That suggests analysts are underestimating the resilience of US recovery, opening the door for upside surprises. In the week ahead, that means measures of April’s new and existing home sales may yield rosier results than consensus forecasts envision.

The item of greatest significance is likely to be the release of minutes from the Fed’s April monetary policy meeting. Traders will be keen to gauge policymakers’ confidence in QE reduction continuity in the early weeks of what is increasingly looking like a re-acceleration of US growth. Recognition of the transition in its infancy would go a long way toward brandishing the Fed’s ability to read the business cycle, bolstering the central bank’s credibility and scattering doubts about the likelihood of an end to QE by autumn.

Unencumbered speculation about the culmination of stimulus expansion and the commencement of interest rate hikes thereafter sparked liquidation across the spectrum of risky assets last year, when then-Chairman Ben Bernanke first introduced the concept of “tapering”. As one of the higher yielders in the G10 FX space, the Australian Dollar is highly sensitive to broad-based risk aversion, meaning another mass exodus from sentiment-geared assets stands to punish currency. -IS