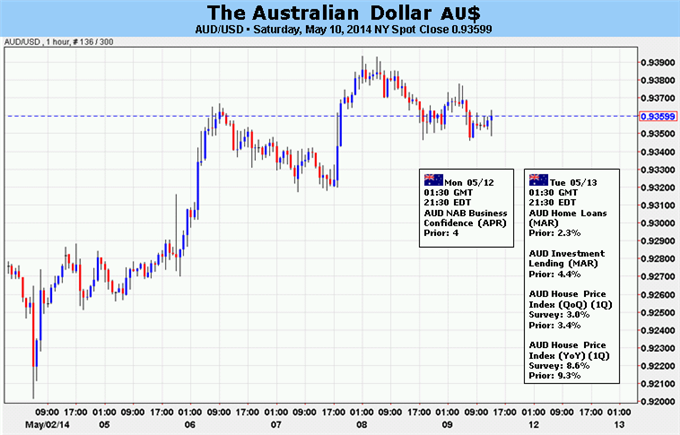 Australian Dollar Rebound at Risk on Firming US Economic Data

The Australian Dollar snapped three consecutive weeks of losses, adding 0.9 percent against its US namesake in the five days through May 9. The recovery followed an improvement in monetary policy expectations: while the RBA issued a status-quo monetary policy announcement, calling once again for a period of stability in interest rates, an impressively upbeat employment report fed hopes that tightening rather than further easing will follow the current standstill. The road ahead may prove to be a perilous one however as external forces conspire to undermine the Aussie in the week ahead.

A quiet economic calendar on the domestic front offers little that can be expected to meaningfully drive monetary policy speculation. The external landscape threatens to unleash heavy headwinds however, with the spotlight on US economic news-flow and its implications for future actions by the Federal Reserve. A central theme driving currency markets since the beginning of the year has been the disconnect between increasingly soft US data outcomes and the Fed’s commitment to continuing to “taper” its QE effort. That encouraged investors to suspect that the central bank may pause or abandon the process of reducing the size of its monthly asset purchases. Newly-minted Fed Chair Janet Yellen and company clearly had other thoughts however.

Needless to say, the tapering process has continued uninterrupted, with the rate-setting FOMC committee slashing the size of its purchases of bonds and MBS securities by $10 billion/month since the effort was launched in December. Policymakers including Yellen have argued that the slowdown in US economic performance in the first quarter was transitory and didn’t warrant a change of course. Hard evidence supporting this position may be emerging at last: a Citigroup index tracking how US economic releases stack up relative to expectations found a bottom in early April and started to reverse upward. Indeed, the measure now sits at the highest in nearly three months.

With that in mind, traders will be keen to monitor the release of April’s US retail sales and inflation data. The CPI print is particularly notable, with the benchmark year-on-year price growth rate expected to jump to a nine-month high of 2 percent. Consumer confidence is likewise seen improving: median forecasts suggest a University of Michigan sentiment gauge jumped to the highest level since July 2013 this month. If the recently improving trend in relative outcomes continues to hold, traders may be treated to upside surprises topping even such formidable results. Such a turn of events may prove potent in helping to scatter doubts about the Fed’s ability to continue with its policy normalization effort.

Unencumbered speculation about the end of QE and the eventual commencement of interest rate hikes thereafter sparked broad-based liquidation across the spectrum of risky assets last year. A repeat of this process now may weigh heavily on the Aussie. As one of the higher-yielding G10 currencies, the unit is highly sensitive to broad-based risk aversion. That means another mass exodus from sentiment-geared assets stands to punish AUD.