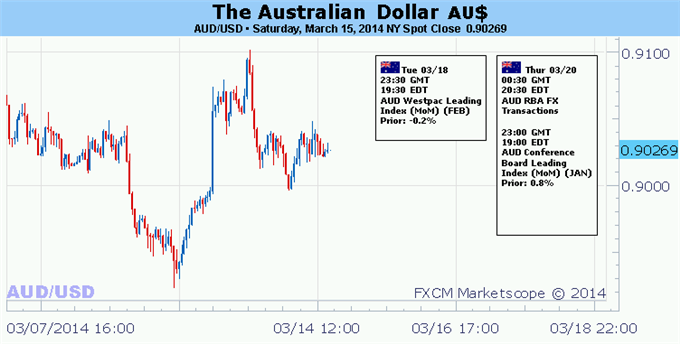 A timid economic calendar on the domestic front is set to put external forces at the forefront for the Australian Dollar in the week ahead. The spotlight is the March FOMC monetary policy meeting, this time to be accompanied by an updated set of official economic projections from the Federal Reserve and Janet Yellen’s first outing at the Chairman press conference. Straight-forward fundamentals may be undermined by the presence of geopolitical risk however which may set off sporadic bouts of risk aversion and undermine follow-through.

The markets have grappled with a difficult conundrum since mid-January: on one hand, US economic news-flow increasingly underperformed relative to consensus forecasts; on the other, the Federal Reserve remained steadfastly committed to “tapering” its QE stimulus effort. Central bank officials have argued that the soft patch in US performance looked to be transitory and did not offer substantive-enough evidence to alter the course of monetary policy. Having now monitored the situation for reasonable period of time, the Fed will have an opportunity to express its views in hard numbers and explain its thinking.

An upbeat set of economic forecasts that belies a firm commitment to continued stimulus reduction couched in similarly-themed rhetoric from the Fed Chair is likely to put the disparity between the direction of US and Australian monetary policy in stark relief. Whereas the RBA has opted for a “period of stability” over the foreseeable future, the FOMC has slowly but surely proceeded with moving from the dovish extreme of the policy spectrum into the opposite direction. That ought to put the Aussie under pressure as the currency’s perceived yield advantage against its US counterpart is eroded.

However, it is also critical to be mindful of the Australian Dollar’s place on the risk-on side of the sentiment divide in the G10 FX space. This makes the currency highly vulnerable to sharp swings in risk appetite, warning of potentially treacherous terrain ahead as geopolitical headwinds gather. The crisis in the Ukraine takes top billing ahead of a referendum in Crimea set to be held this weekend. The poll will decide whether the semi-autonomous region will choose to be part of a nation headquartered in Kiev or Moscow.

The referendum’s outcome and subsequent maneuvers from world powers has scope to generate significant knee-jerk volatility in investors’ mood. An upsetting of the status quo is often the risk-off scenario in the markets’ treatment of geopolitics, suggesting a vote to secede from the Ukraine and be absorbed into Russia may carry negative implications for the Aussie. Such an outcome is somewhat high on investors’ probability scale however, so the surrounding theatrics (including Moscow’s moves to scramble together the legislative framework to allow Crimea to join the Federation) will be important in gauging market-moving potential.