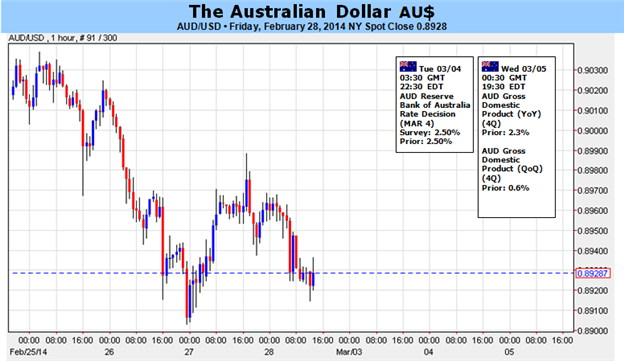 The week ahead promises to be action-packed for the Australian Dollar, with a slew of catalysts on the domestic and the global front due to cross the wires. February’s AUD/USD slide closely mirrored deterioration in the spread between Australian and US front-end yields. This suggests relative monetary policy considerations are the driving force at play and offers a prism through which to view incoming news-flow.

On the home front, the spotlight is on the RBA interest rate decision. Economists expect no changes this time around and markets seem to agree, with data from Credit Suisse showing traders are pricing in a mere 4 percent probability of another 25bps reduction in the benchmark lending rate at this sit-down. Indeed, RBA Governor Glenn Stevens explicitly argued for “a period of stability in interest rates” at the bank’s February meeting, suggesting the status quo is likely to be fairly sticky for the time being.

Separately, AustralianGDP figures are set to show the economy accelerated a bit in the fourth quarter, adding 0.7 percent and topping the 0.6 percent increase recorded in the three months through September. The release comes after the RBA announcement however and may not carry much market-moving potential if the central bank reiterates continued policy standstill. An upbeat growth figure means relatively little in FX terms if it doesn’t carry tightening implications.

The external landscape is far less stable as churning speculation surrounding the disconnect between soft US economic data and the Federal Reserve’s dogged commitment to continue “tapering” QE is fed with a string of high-profile releases. February’s manufacturing- and service-sector ISM readings, the Fed’s Beige Book survey of regional economic conditions and the dreaded US Employment report are all on tap. These data points will go a long way toward informing the debate on the extent to which the slowdown witnessed in the past three months is a temporary soft patch or a larger undoing of the US recovery.

Median forecasts suggest the overall tone of US economic news flow is likely to argue in favor of the former scenario, with February’s news-flow looking a bit brighter compared with the prior month. If this materializes as expected, investors will have weighty reasons to suspect the Fed has been right to look past recent weakness to press on with stimulus reduction. That is likely to dispel some of the recent uncertainty about the path of asset purchases. Taken together with standstill on the RBA side of the equation, this translates into further contraction in Australia-US yield spreads and Aussie weakness. - IS