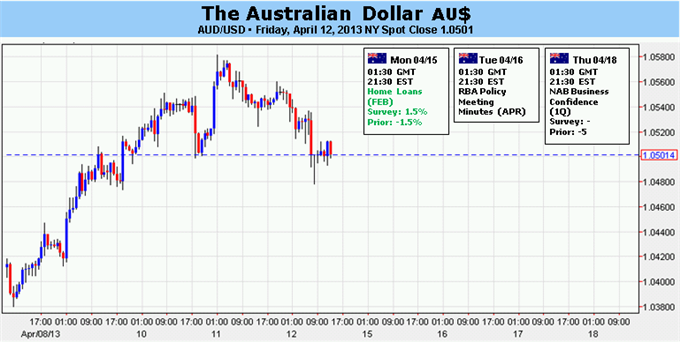 The Australian Dollar finds itself caught between conflicting forces in the week ahead. On one hand, the argument for a reversal lower appears to be gaining credence. The outlook for RBA monetary policy has been cautiously deteriorating. A Credit Suisse gauge tracking interest rate change expectations over the coming year now stands at the lowest level in close to six weeks and calling for at least 25bps in additional easing. Against this backdrop, AUDUSD recoiled downward in the final hours of the last trading week having hit its long-standing range top near the 1.06 figure, a barrier that has prompted four sizable rejections lower since August 2012.

On the other, the economic reality on the ground in Australia doesn’t seem to have become materially worse. Last week’s seemingly disappointing employment report appears far less negative than headline data suggests. Meanwhile, clues from Chinese trade and inflation figures look outright supportive, which bodes well considering the Asian giant is Australia’s largest trading partner. This perhaps explains why markets are not looking for interest rate cuts in the near term despite upgrading their probability by mid-April 2014. Indeed, the aforementioned Credit Suisse data on priced-in policy expectations puts the chance of a reduction in borrowing costs next month’s RBA sit-down at a mere 25 percent.

The overall macro landscape seems likewise supportive for the Australian unit. Disappointing economic data from the US has presented an increasingly forceful argument against a near-term tapering of Federal Reserve stimulus efforts over the past two weeks. Meanwhile, the Bank of Japan has embark on its own dramatic loosening of monetary policy and the Bank of England doesn’t seem far behind as the handover of the Governorship from outgoing Mervyn King to current BOC chief Mark Carney draws closer. That makes the Aussie far more attractive by comparison, distant rate cut bets notwithstanding.

Importantly, this pre-supposes investors will continue prize returns over safety however. Another breakout of market-wide risk aversion will see the markets abandon yield-seeking plays in favor of stand-by havens including the US Dollar and Japanese Yen, unwinding carry trades and dumping the likes of the Aussie along the way. Signs of receding Eurozone instability risk over the past two weeks suggest the culprit for such a turn of events is likely to be found on the economic growth side of the equation. Indeed, a survey of economists polled by Bloomberg points to a sharp deterioration in global GDP growth expectations over the past month, punctuated most recently by re-emerging fears of a US slowdown.

On balance, the accelerating flow of corporate earnings results is likely to tip the scales of risk appetite in the week ahead. Signs of resilience will paint recent US economic news-flow as supportive of Fed QE, boosting sentiment and likely offering support to the Aussie. A softer tone may force risk trends into full retreat however, spelling weakness for the high-yielding currency.