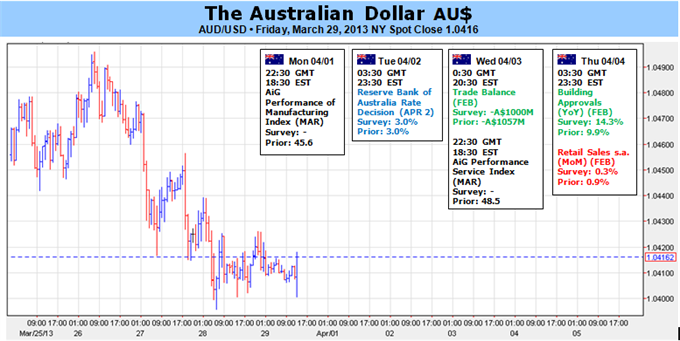 The Reserve Bank of Australia returns to the spotlight in the week ahead. Economists expect the RBA to keep the benchmark interest rate unchanged at 3 percent. The markets seem to agree, with data compiled by Credit Suisse showing traders are pricing in a mere 8 percent probability of a 25 basis point reduction.

That puts the onus on the statement accompanying the announcement as traders formulate expectations for the months ahead. Indeed, a trade-weighted index of the Aussie’s average value against its leading counterparts has recently tracked a Credit Suisse gauge measuring the one-year priced-in outlook for RBA policy with near-perfect precision (yielding a correlation reading of 0.9 on 20-day studies).

The central bank’s position as stated over the past two months has favored a wait-and-see attitude. RBA Governor Glenn Stevens has argued that there was time to allow prior easing efforts to fully filter into the broader economy before offering further accommodation. More of the same seems likely this time around, supporting the erosion of rate cut bets as well as the Aussie Dollar.

Australian economic news-flow has been broadly encouraging since the central bank’s last sit-down, with a surge in employment in February marking a particularly strong data point. Although tightening monetary policy seems out of the question against a backdrop of lingering global financial market jitters (primarily emanating from the Eurozone), the urgency to stimulate further in the near term seems absent.

On the risk appetite side of the equation, the focus will be on the US data docket. The resilience of recovery in the world’s largest economy in the face of mounting fiscal austerity (courtesy of tax hikes to avoid the “fiscal cliff” and “sequester” spending cuts) remains an important macro-level theme shaping the overall sentiment landscape.

The March set of manufacturing- and service-sector ISM activity survey numbers as well as the closely-watched Nonfarm Payrolls print take top billing. Expectations point to slight moderation on all fronts compared with February’s results. US economic data has tended to outperform relative to expectations since early February according to data from Citigroup however. More of the same is likely to be supportive of risk trends, pulling the high-yielding Aussie higher. -IS