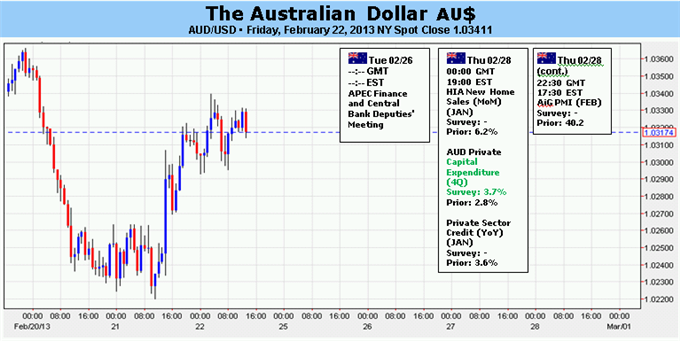 Australian Dollar at Risk on Italian Election, US Growth Fears

The Australian Dollar mounted a spirited recovery last week, posting the largest 5-day advance in nearly two months after RBA Governor Glenn Stevens talked down interest rate cut expectations in testimony to the House Economics Committee. The domestic calendar is quiet in the week ahead while AUDUSD continues to show a significant correlation to our in-house risk-reward gauge, suggesting sentiment trends stand poised to take control of price action.

The outcome of Italy’s general election held over the weekend will set the tone for risk appetite. The latest polls put Democratic Party leader Pier Luigi Bersani in the lead, but PdL party head and former Prime Minister Silvio Berlusconi is penciled in at an uncomfortably close second place. Traders are concerned that hard-fought reforms meant to put Italy’s fiscal house in order will be squandered if Mr Berlusconi retakes the reigns, plunging the Eurozone’s third-largest economy and the region at large back into the depths of the sovereign debt crisis.

Meanwhile, concerns about the outlook for US economic growth are set to return in a significant way as the deadline to trigger the “sequester” spending cuts – originally a part of the so-called “fiscal cliff” that was pushed out by two months in the compromise deal struck in January – looms on Friday. Needless to say, traders are concerned that another hefty dose of austerity may snuff out the already fragile US economic recovery, with dire consequences for the world at large.

Against this backdrop, a slew of high-profile US economic data releases are due to come across the wires. The roundup of regional Fed activity surveys will be in focus as traders refine expectations for Friday’s closely-watched ISM Manufacturing print. Durable Goods Orders and Consumer Confidence reports are likewise on tap. Further still, Federal Reserve Chairman Ben Bernanke is due to testify in Congress, with investors no doubt keen to see if the hawkish tone emerging in last week’s release of January’s FOMC minutes carries forward to further threaten the outlook for US performance.

On balance, this points toward ample space for Australian Dollar volatility. If Mr Berlusconi returns to power in Italy or the US economic growth outlook is hobbled by a pullback on support from both fiscal and monetary policy, a surge of risk aversion stands ready to sink AUD along with the spectrum of cycle-sensitive assets. This need not be the default outcome. Indeed, Mr Bernani may prevail, a last-minute “sequester” deal avoiding the lion’s share of spending cuts may be struck, and Mr Bernanke may pour cold water on bets for an early end to Fed stimulus. Asking for so much to go right at the same time seems like a tall order however.