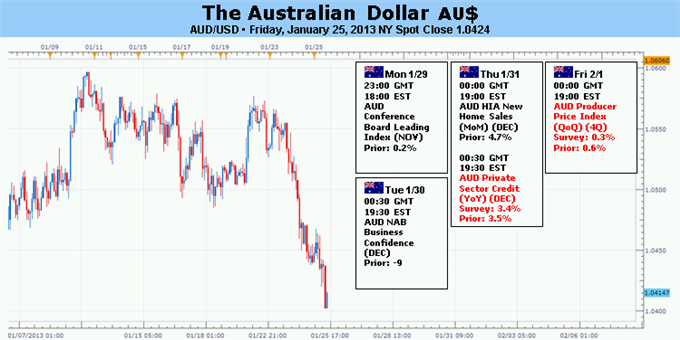 A relatively quiet domestic economic calendar will once again see the Australian Dollar looking outward for directional guidance in the week ahead. The outlook for US economic growth remains a critical unknown in forecasting the overall macroeconomic environment and investors will be treated to a wealth of relevant event risk to set the stage for the near- to medium-term environment over the coming days. Separately, the outlook for RBA monetary policy in the run-up to next month’s policy announcement will be informed by another high-profile data point from China, Australia’s largest trading partner and a critical driver of its mining sector.

In the US, the spotlight initially turns to fourth-quarter GDP figures, where economists expect to see that output added 1.2 percent compared with a 3.1 percent increase in the three months through September 2012. This is followed by the FOMC monetary policy announcement. Ben Bernanke and company seem overwhelmingly unlikely to introduce anything new into the policy mix after December’s major reshuffling. The rhetoric of the policy statement may take a stronger dovish tone however if the central bank sees a need to talk down expectations of an early unwinding of stimulus after the adoption of the “Evans rule”. Finally, January’s employment (Nonfarm Payrolls, Unemployment Rate) and manufacturing (ISM) metrics are expected to print closely in line with the prior month’s results.

On balance, this makes for a potentially vulnerable environment. Slowing growth and a dour statement from the Fed may begin to pour cold water on buoyant sentiment trends. Meanwhile, US economic data has increasingly fallen short of expectations since late December (according to data from Citigroup). If this trend continues, a disappointing set of NFP and ISM figures could tip the scales toward outright risk aversion. Indeed, while lackluster performance in the world’s largest economy is negative for the markets’ mood in its own right, it is all the more ominous considering the current crop of data releases sets the stage for the upcoming fight over “sequester” spending cuts in Washington DC and shapes perceptions of resilience in the face of further austerity.

The Australian Dollar continues to show a meaningful overall correlation to risk appetite trends (as tracked by the MSCI World Stock Index). This means the treacherous road ahead on the sentiment front threatens to unleash selling pressure upon the high-yielding currency. January’s Chinese Manufacturing PMI figures – both the official kind and those from HSBC – stand to offer a countervailing force to this dynamic, showing industrial-sector growth continues to recover. That bodes well for the Aussie, suggesting the RBA may be reluctant to cut rates as the formative mining sector enjoys healthy demand from its largest overseas customer. Follow-through may be lackluster however, yielding little besides a short-term term advance. Evidence of a Chinese rebound has been filtering into asset prices at least since the beginning of the month while traders’ priced-in outlook already leans toward a “hold” RBA decision next month, so markets may find little to surprise them in the PMI roundup.