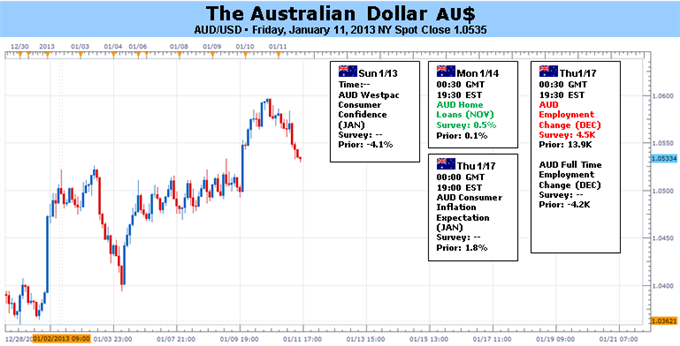 The Australian Dollar pushed higher last week as Chinese trade figures soared past economists’ expectations, boosting global growth expectations and buoying the risk-linked currency. It certainly didn’t hurt that China is Australia’s largest trading partner either, with the strong pick-up in the Asian giant’s overseas sales promising to underpin demand for the mining sector that has been such a critical engine of economic growth.

One data point is not enough to make for a sustained trend however. Indeed, AUDUSD conspicuously failed to take out its critical range top near the 1.06 figure. Traders will now look for confirmation, and the week ahead offers plenty of potential catalysts on the economic data and risk sentiment fronts to make or break the Aussie’s latest advance.

Turning to the calendar, the spotlight first turns to December’s Employment report, which is expected to show that hiring slowed to yield a 4.5k increase in compared with 13.9k in the prior month while the jobless rate rose to 5.4 percent from 5.2 percent. Later in the week, Chinese GDP figures are expected to reveal that the economy added 2.2 percent in the fourth quarter, matching the gain in the three months through September. The year-on-year growth rate is seen edging higher to 7.8 from 7.4 percent, however.

On balance, with Aussie speculative net-long positioning still at extremely elevated levels, the risk of a reversal lower seems significant. Indeed, leading indicators have amply foreshadowed the recent stabilization in Chinese growth and prices have reacted accordingly, meaning that only a truly dramatic upside surprise on the GDP figure is needed to yield something beyond what is already priced in and produce a substantial advance. That opens the door for profit-taking, a process that may be encouraged by a slowdown in jobs growth.

Meanwhile, the risk appetite side of the equation offers no shortage of its own triggers. The fourth-quarter earnings reporting season continues, with financials in focus in the days ahead. Against this backdrop, the World Bank is due to unveil an updated set of macroeconomic forecasts while Germany will present its latest outlook figures. Needless to say, both reports can carry serious implications for the markets’ view on global growth, which may become formative for sentiment and by extension for the Aussie.