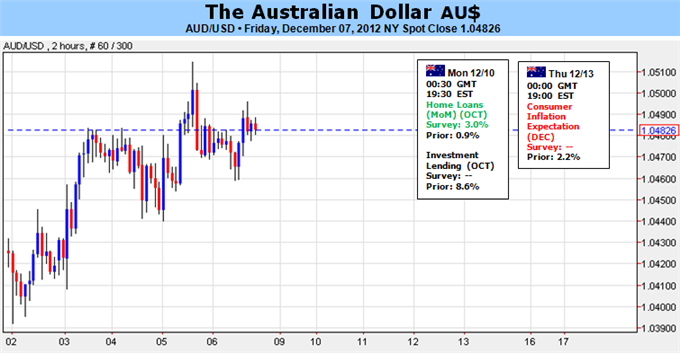 Australia’s domestic economic calendar is quiet in the week ahead but an early dose of high-profile Chinese releases stands to set the tone for price action. November’s CPI reading is expected to put the year-on-year inflation rate at 2.1 percent, the highest in five months. Meanwhile, Industrial Production is expected to languish in single digits compared with the historical average of about 14 percent while exports expand at the weakest pace since August. Such outcomes bode ill for Australia’s crucial mining sector, which relies heavily on Chinese demand, and put downward pressure on the Aussie as forex traders rebuild near-term RBA rate cut expectations.

Later in the week, larger risk trends come into focus. Prices continue to show a significant correlation with the S&P 500 – a proxy for market-wide sentiment trends – exposing the Aussie to a busy docket of event risk. A series of Eurozone summits keeps the debt crisis in the headlines. The latest tranche of Greece’s bailout is up for review on Thursday against the backdrop of a larger EU leaders’ summit due to tackle a host of other thorny issues dealing with deepening the monetary union on the basis of President Herman Van Rompuy’s “building blocks” proposal. This month’s sit-down has long been billed as the time for final agreements to emerge after months of haggling, meaning traders will look for game-changing headlines to emerge. If the summit fizzles once again, risk sentiment is likely to suffer and punish the Australian Dollar in the process.

On the global economic growth front, all eyes are on the Federal Reserve monetary policy announcement. Significant changes in the policy mix appear unlikely. A potent dose of volatility may still emerge however as traders parse an updated set of economic projections from the rate-setting committee and tune into Chairman Ben Bernanke’s press conference following the policy announcement. A pessimistic message on growth trends in the world’s largest economy stands to undermine risk and send the Aussie lower (and vice versa).

Meanwhile, ongoing negotiations to avert the so-called “fiscal cliff” – a set of spending cuts and tax hikes due to trigger at the turn of the calendar year – continue to capture investors’ attention. The Congressional Budget Office (CBO) estimates the burst of austerity – if left to trigger as scheduled – is likely to tip the US back into recession in the first six months of 2013. US lawmakers from both side of the aisle have tried to project optimism in recent weeks but a substantive breakthrough remains elusive. Continued failure to get something meaningful done as the deadline to do so draws closer may compound risk aversion and weigh on the Aussie.