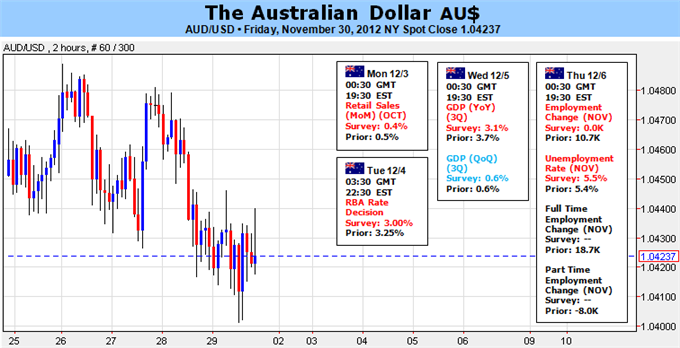 Forex Analysis: Australian Dollar, Stocks Link in the Hands of the RBA

The Australian Dollar looks ahead to volatile week, with major event risk lining up on the domestic and the broader risk-sentiment fronts. The RBA monetary policy announcement stands above the rest however, with the outcome likely to reverberate for the remainder of the week and quite possibly beyond. Rate cut expectations surged last week, with investors now pricing in an 83 percent probability of a 0.25 percent reduction in benchmark borrowing costs. This suggests that if Glenn Stevens and company deliver as forecast, downward pressure beyond an immediate knee-jerk reaction will require a dovish policy statement mapping out further easing in the months ahead. On the other hand, a surprise decision to hold rates unchanged has scope to produce significant upside movement as traders now skewed in favor of a rate cut are forced to reposition.

Critically, the RBA’s decision will help determine the Australian Dollar’s sensitivity to the busy docket of sentiment-driving event risk later in the week. Indeed, it is the Aussie’s high yield profile that anchors it to risky assets. If rates are cut and the RBA offers guidance suggesting additional easing down the road is likely, the Australian currency is likely to diverge from sentiment trends once again, repeating a similar episode preceding October’s 25bps reduction. Needless to say, a neutral statement or an unexpected move to hold rates at 3.25 percent stands to renew the Aussie/sentiment correlation and – for better or worse – expose the currency to a plethora of high-profile event risks.

On the economic data front, the European Central Bank interest rate decision will be important as traders hope for a set of growth-supportive measures to help mitigate the most significant lingering headwind facing global output: the recession in the Eurozone. Opting to remain on hold may weigh on risk appetite, with possible negative implications for the Aussie. The US docket is likewise peppered with top-tier releases. Manufacturing- and service-sector ISM readings are expected to keep activity levels little-changed on a month-to-month basis but the closely watched Employment report is readying signs of weakness. Forecasts suggest the economy added 90,000 jobs in November, marking the weakest labor-market performance in five months. This too may weigh on the Australian currency.

Against this backdrop, on-going negotiations to avert the so-called “fiscal cliff” – a set of spending cuts and tax hikes due to trigger at the turn of the calendar year – continue to capture investors’ attention. The Congressional Budget Office (CBO) estimates that, if left as-is, the burst of austerity is likely to tip the US back into recession in the first six months of 2013. US lawmakers from both side of the political spectrum have done their utmost to project an optimistic façade over recent weeks but a substantive breakthrough remains elusive. Continued failure to get something meaningful done as the deadline to do so draws ever closer may begin to chip away at confidence as well as the Aussie despite politicians’ vague assurances until (and if) something meaningful emerges.