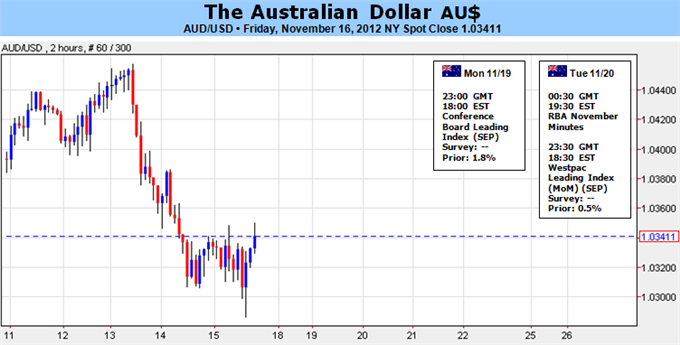 As we discussed last week, the Australian Dollar is rebuilding its correlation with broad-based risk sentiment trends, with the correlation between AUDUSD and the S&P 500 now at 0.57 on 20-day percent-change studies. In the week ahead, this suggests that the Aussie may come under pressure as risk appetite continues to erode across financial markets.

The Eurozone debt crisis remains key, with the currency bloc’s finance ministers scheduled to tackle the thorny issue of Greek bailout funding Tuesday. Athens has struggled to reach agreement with the so-called “troika” (EU, ECB, IMF) about the release of the latest tranche of bailout funding. Continued failure to secure a deal on extending the deadline for Greece to meet its budgetary objectives that restarts the flow of rescue cash is likely to fan the flames of sovereign risk anew.

While Greece is a very small part of the Euro area, it has been looked upon to set the precedent for how the single currency bloc deals with the debt crisis. Investors will swiftly translate a lack of progress that reboots fears of a disorderly endgame to the Greek ordeal into what a similar scenario would mean in countries like Spain, driving risk aversion across financial markets and pulling the Aussie lower along with stock markets.

Critically, a major source of funding for bailout efforts may be in jeopardy as the EU begins a two-day meeting Thursday to hammer out its budget for the coming 7 years. Familiar issues have resurfaced, with France arguing against proposed cuts to the cherished Common Agricultural Policy (CAP) that heavily subsidizes farmers in the EU’s number-two economy while the UK threatens to veto the budget if spending is not adequately reduced. While this is a familiar battle within the EU that has routinely emerged in budget negotiations only to end in compromise, the backdrop of the Eurozone debt crisis may make for a more heated outing and could spark risk aversion if a resolution is not quickly agreed upon.

Meanwhile, the looming “fiscal cliff” in the US remains a major concern. With the election out of the way, the re-elected Democratic president must cobble together a deal with a divided Congress to avert the onset of steep tax hikes and spending cuts due to be triggered at the turn of the calendar year. The Congressional Budget Office (CBO) estimates that if the hefty dose of austerity is allowed to proceed as-is, it stands to trim US GDP growth by a hefty 0.6 percent in 2013, tipping the economy into recession in the first half of the year.

In an environment where investors are hoping a firming US recovery will help countervail headwinds from Europe and Asia, the prospect of such a scenario is decidedly negative for sentiment. That means traders will closely monitor commentary from US officials in the week ahead after a meeting of the major players on Friday yielded little besides backslapping and vague rhetoric. Signs of lingering deadlock are likely to amplify risk-averse tendencies and compound Aussie selling pressure.

On the domestic data front, the spotlight is on minutes from November’s RBA monetary policy meeting as traders gauge whether the central bank’s decision to leave rates unchanged marked a temporary pause in the easing cycle or a longer-term shift to a neutral setting. For their part, the markets are pricing in a 65 percent probability of another 0.25 percent reduction in the benchmark lending rate in December. -IS