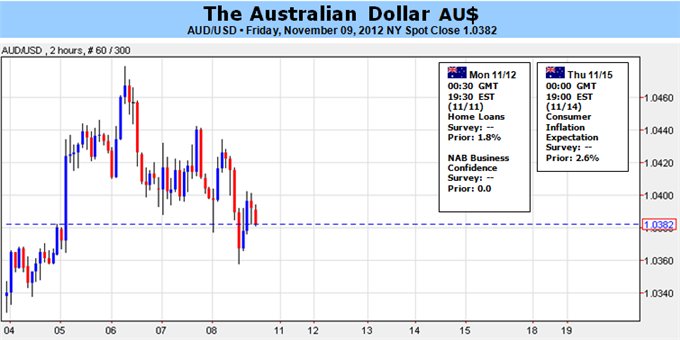 The Australian Dollar is rebuilding its correlation with broad-based risk sentiment trends after diverging to focus on domestic policy issues over the past six weeks. The breakdown in the relationship came as the Reserve Bank of Australia (RBA) hinted at forthcoming interest rate cuts in minutes from September’s policy meeting and delivered a 25bps reduction at October’s sit-down. That eroded the Aussie’s profile as a high yielder, undermining the very thing that anchored the currency to risk appetite.

A run of better-than-expected economic data since then coupled with a neutral tone at November’s RBA meeting has weighed against rate cut bets, allowing the Aussie to find its way back to the risky asset side of the sentiment spectrum. Indeed, the correlation between AUDUSD and the S&P 500 now stands at the highest in a month (0.56 on 20-day percent-change studies).

Looking to the week ahead, this suggests that the Aussie is likely to look past a quiet homegrown set of scheduled event risk toward larger market trends. The Eurozone debt crisis is likely to dominate attention, with the currency bloc’s finance ministers scheduled to meet as Greek officials continue to negotiate with the so-called “troika” (EU, ECB, IMF) about the release of the latest tranche of bailout funding. Continued failure to reach agreement on extending Athens’ deadline to meet its budgetary objectives that restarts the flow of rescue funds and alleviates swelling public discontent with biting austerity is likely to fan the flames of sovereign risk anew.

While Greece is a very small part of the Euro area, it has been looked upon to set the precedent for how the single currency bloc deals with the debt crisis. Investors will swiftly translate a lack of progress that reboots fears of a disorderly endgame to the Greek ordeal into what a similar scenario would mean in countries like Spain, driving risk aversion across financial markets and pulling the Aussie lower along with stock markets.

Meanwhile, the looming “fiscal cliff” in the US remains a major concern. With the election out of the way, the re-elected Democratic president must cobble together a deal with a divided Congress to avert the onset of steep tax hikes and spending cuts due to be triggered at the turn of the calendar year. The Congressional Budget Office (CBO) estimates that if the hefty dose of austerity is allowed to proceed as-is, it stands to trim US GDP growth by a hefty 0.6 percent in 2013, tipping the economy into recession in the first half of the year.

In an environment where investors are hoping a firming US recovery will help countervail headwinds from Europe and Asia, the prospect of such a scenario is decidedly negative for sentiment. That means traders will closely monitor commentary from US officials in the week ahead, with signs of persisting deadlock likely to amplify risk-averse tendencies and compound Aussie selling pressure.