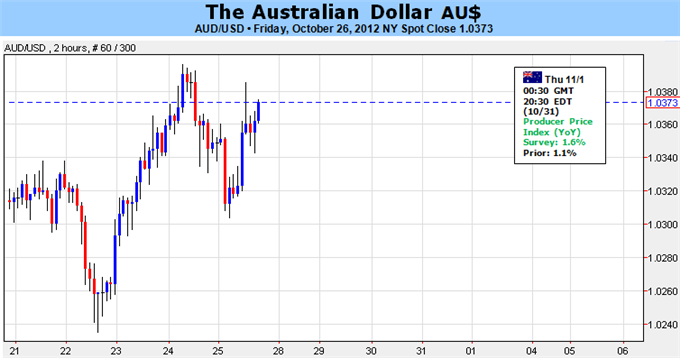 The Australian dollar pared the decline from the October high (1.0410) as stronger price growth in the $1T economy sapped bets for additional monetary support, but the high-yielding currency may struggle to hold its ground going into November as interest rate expectations remain tilted to the downside. As consumer prices expand at the fastest pace since the fourth-quarter of 2011, the larger-than-expected uptick in price growth may push the Reserve Bank of Australia to the sidelines, and the central bank may revert back a wait-and-see approach ahead of 2013 as the headline reading for inflation climbs back within the 2%-3% target range.

Despite the uptick in price growth, Australian Treasurer Wayne Swan anticipates the Reserve Bank of Australia to look past the rise in price growth, which was largely driven by temporary factors, and the central bank may continue to strike a dovish tone for monetary policy as the fundamental outlook for the region appears to be ‘somewhat weaker’ than initially expected. As the economic calendar for the following is expected to show a marked decline in export prices, the weakening outlook for global trade is likely to dampen the appeal of the aussie, and RBA Governor Glenn Stevens may take additional steps to stem the downside risks for the region as central bank sees the resource boom peaking ‘a little earlier, and at a somewhat lower level.’ According to Credit Suisse overnight index swaps, market participants still see a 58% chance for another 25bp rate cut at the November 5 meeting, while the benchmark interest rate is anticipated to fall by nearly 75bp over the next 12-months as commercial banks remain reluctant to pass on lower borrowing costs.

As the AUDUSD struggles to put in another close above the 23.6% Fibonacci retracement from the 2010 low to the 2011 high around 1.0370, the pair certainly appears to be carving a lower top in October, and the high-yielding currency looks poised to give back the rebound from 1.0148 as it maintains the downward trend carried over from the previous year. In turn, we will preserve our bearish forecast for the aussie-dollar, and the pair may face a short-term reversal in the week ahead should the fundamental developments coming out of the $1T economy fuel speculation for further rate cuts. - DS