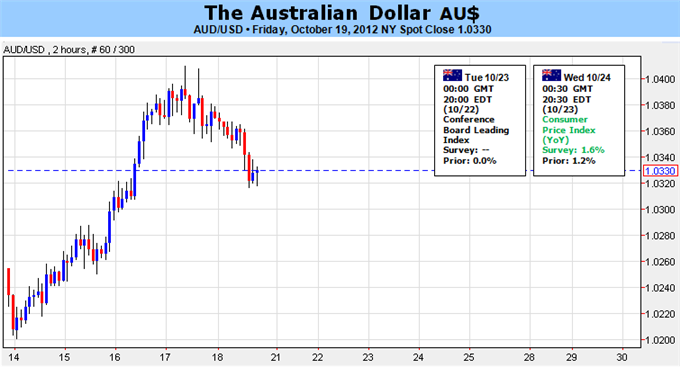 The Australian dollar fell back from a fresh monthly high of 1.0410 as market participants curbed their appetite for risk, but the high-yielding currency may regain its footing next week as price growth in the $1T economy is expected to bounce back in the third quarter. The consumer price report highlights the biggest event risk for the aussie, and we may see a bullish reaction to the print as the headline reading for inflation is expected to increase 1.6% after expanding 1.2% during the three months through June.

However, the policy outlook continues to instill a bearish forecast for the AUDUSD as the Reserve Bank of Australia scales back its fundamental assessment for the region, and we should see the central bank continue to embark on its easing cycle in an effort to encourage a stronger recovery. Indeed. the RBA Minutes sounded more dovish this time around as the board sees the resource boom peaking ‘a little earlier, and at a somewhat lower level,’ and we should see the central bank continue to target the benchmark interest rate as the softer outlook for growth gives the central bank scope ‘to be a little more accommodative.’ As commercial banks remain reluctant to pass on the RBA’s rate cuts, investors are pricing a 77% chance for another 25bp reduction at the November 5 meeting, while borrowing costs are anticipated to fall by at least 75bp over the next 12-months according to Credit Suisse overnight index swaps. As the interest rate outlook remains tilted to the downside, speculation for additional monetary support should continue to dampen the appeal of the Australian dollar, and the high-yielding currency remains vulnerable to further headwinds as China – Australia’s largest trading – continues to face a risk for a ‘hard landing.’

Faster price growth in Australia should help to prop up the AUDUSD in the week ahead, but we will maintain a bearish forecast for the pair as it preserves the downward trend carried over from 2011. At the same time, the aussie-dollar appears to be carving out a lower top in October as the exchange rate fails to hold above the 23.6% Fibonacci retracement from the 2010 low to the 2011 high around 1.0370, and we may see the Australian dollar threaten the monthly low (1.0148) should market sentiment deteriorate further. - DS