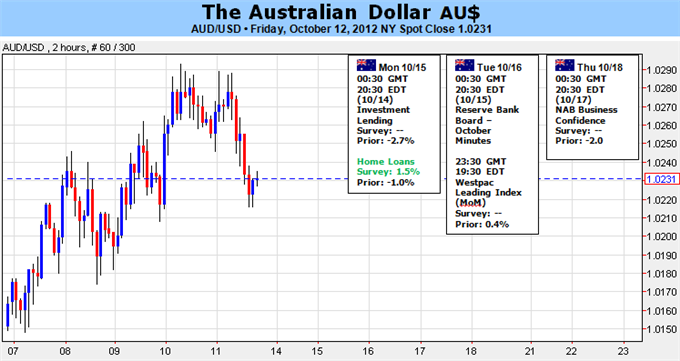 The heretofore iron-clad relationship between the Australian Dollar and broad-based risk appetite trends appears to be unraveling. Indeed, near-term correlation studies suggest that the link between the currency’s average value against its top counterparts and the MSCI World Stock Index – a benchmark gauge for market-wide sentiment – has dropped to the weakest since January 2011. This puts the outlook for RBA monetary policy in the spotlight, with rate cut bets threatening to produce losses.

The root of the correlation between the Aussie and risky assets had been found in the currency’s exceptional yield, the highest among its G10 counterparts. When general sentiment was on the upswing and investors’ primary objective was to generate the highest possible returns (as opposed to capital preservation, which prevails as the chief concern at times of market stress), the Aussie’s high-return characteristics made it a natural beneficiary.

With that in mind, the recent collapse in the relationship seems logical as swelling RBA interest rate cut expectations stripped the Aussie of the very quality that kept it anchored to risk appetite. Indeed, the plunge in correlation studies begins in mid-September, immediately after the RBA released minutes from its policy meeting earlier that month that signaled an imminent easing of monetary policy. The central bank followed through at its October sit-down, reducing the benchmark rate by 25bps and signaling more was likely to come. Traders now price in a 76 percent probability of an equivalent reduction in November, according to data from Credit Suisse.

Looking to the week ahead, a focus on monetary policy expectations is likely to see the Aussie start off on a strong note as Chinese Trade Balance figures released over the weekend weigh on RBA rate cut bets. The report showed exports rose 9.9 percent in September, topping economists’ calls for a 5.5 percent increase and yielding the strongest reading in four months. A pickup in overseas demand for Chinese goods bodes well for that economy’s growth profile, which in turn stands to benefit Australia since demand from the East Asia giant is arguably the most significant driver of the latter country’s mining boom.

Further down the road however, selling pressure is likely to reassert itself. Minutes from October’s RBA meeting are likely to mirror the increasingly worried tone of the policy statement issued in the immediate aftermath of the sit-down. Separately, Chinese GDP data is due to show that the annual growth rate slowed to 7.4 percent in the third quarter, marking the weakest reading since the Great Recession trough at 6.2 percent in the three months through March 2009. Meanwhile, a slowdown in Chinese CPI is unlikely to be as potent of a supportive force as previously considering Beijing has been attempting monetary stimulus via reverse repo operations with little perceptive success for months now. –IS