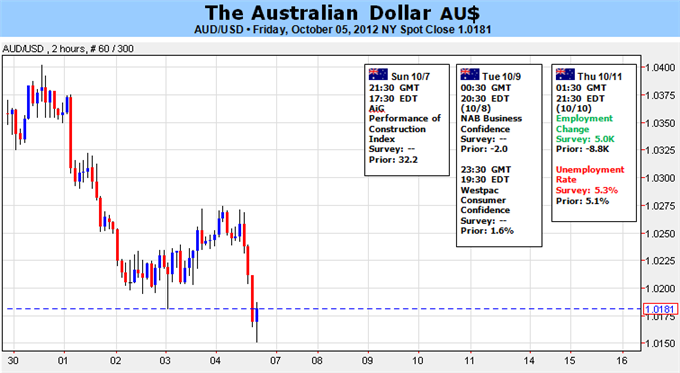 The Australian dollar struggled to hold its ground as the Reserve Bank of Australia unexpectedly took additional steps to shore up the $1T economy, and the high-yielding currency may face additional headwinds in the coming week as the fundamental outlook for the region deteriorates. Indeed, the RBA surprised with a 25bp rate cut in October and lowered the benchmark interest rate to 3.25% in an effort to combat the slowing recovery, and Governor Glenn Stevens may continue to embark on the easing cycle throughout the remainder of the year as the central bank scales back its forecast for growth.

The RBA sounded more dovish this time around, with the central bank stating that ‘the peak in resource investment is likely to occur next year, and may be at a lower level than earlier expected,’ and the board remains poised to push the cash rate lower as China – Australia’s largest trading partner – faces a growing threat for a ‘hard landing.’ According to Credit Suisse overnight index swaps, investors are pricing an 80% chance for another rate cut at the November 5th meeting, while market participants see borrowing costs falling by another 75bp over the next 12-months as the RBA warns that ‘the growth outlook for next year looked a little weaker.’ In turn, Prime Minister Julia Gillard argued that lenders should pass on the recent rate cut in full, but Governor Stevens may show a greater willingness to ease policy further as commercial banks remain reluctant to funnel the discount onto Australian households. Nevertheless, as the RBA notes that the ‘labour market has generally softened somewhat in recent months,’ the employment report on tap for the following week may show another unexpected decline in job growth, and dismal development is likely to dampen the appeal of the aussie as the central bank keeps the door open to expand monetary policy further.

As the AUDUSD maintains the downward trend carried over from 2011, we will preserve our bearish forecast for the exchange rate, and the pair may continue to give back the rebound from the yearly low (0.9580) as it closes below the 100-Day SMA (1.0243) for the first time since July. In turn, we may see the AUDUSD make a run at the 38.2% Fibonacci retracement from the 2010 low to the 2011 high around 0.9930, but we will be keeping a close eye on the relative strength index as it approaches oversold territory. - DS