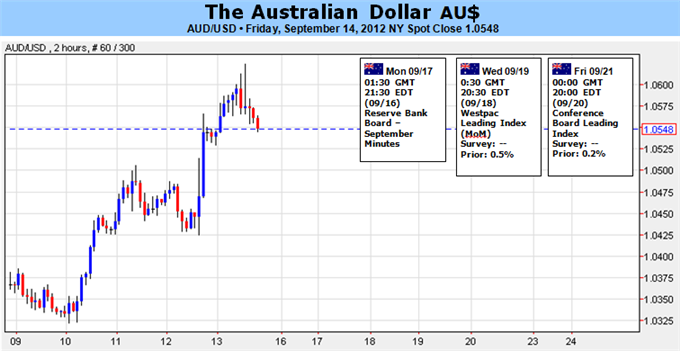 The AUDUSD climbed to a fresh monthly high of 1.0624 as the Australian dollar benefitted from the rise in risk sentiment, but the high-yielding currency may come under pressure next week should the Reserve Bank of Australia show a greater willingness to ease monetary policy further. Indeed, the RBA Minutes highlight the biggest event risk for the Aussie, and the fresh batch of central bank rhetoric may dampen the appeal of the high-yielding currency as Governor Glenn Stevens turns increasingly cautious towards the $1T economy.

The RBA’s quarterly bulletin struck a weakened outlook for the region, with the central bank warning that the ‘forecasts derived from the capital expenditure survey must be interpreted with a fair degree of caution,’ and we may see the policy statement spur speculation for additional monetary support as ‘the cap-ex expectations data have tended to overpredict the upswing in mining investment over the past two years.’ As Governor Stevens sees the resource boom coming to an end over the next 12 to 24 months, we should see the RBA continue to embark on its easing cycle throughout the second-half of the year, and the central bank may take additional steps at the October 2 meeting as China – Australia’s largest trading partner – faces a growing threat for a ‘hard landing.’ According to Credit Suisse overnight index swaps, market participants are pricing a 40% chance for a 25bp rate cut next month, but still see borrowing costs falling by at least 75bp over the next12-months amid the ongoing slack in the real economy. At the same time, the RBA may continue to highlight the persistent strength in the Australian dollar as it remains ‘higher than might have been expected,’ and we may see the central bank try to talk down the local currency as ‘the terms of trade peaked a year ago and have declined significantly since then.’

As the AUDUSD clears the August high (1.0612), the rise in risk-taking behavior may continue to prop up the high-yielding currency, but the near-term rally may be coming to an end as the relative strength index approaches interim resistance around the 67 figure. In turn, we may see the AUDUSD preserve the downward trend from 2011, and we will preserve our bearish forecast for the Australian dollar as the interest rate outlook remains tilted to the downside. - DS