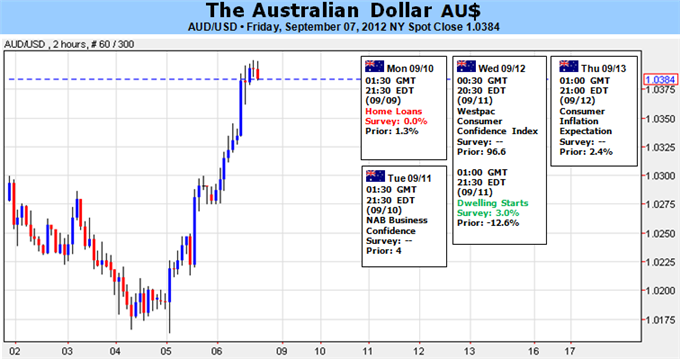 The Australian Dollar was particularly soft this past week, finishing close to the bottom among the majors covered by DailyFX Research, and closing up a mere +0.61% against the US Dollar. The high beta currency that typically leads during pure ‘risk-on’ rallies trailed for most of the week, falling -1.25% through Wednesday before a late-week liftoff courtesy of the European Central Bank and the Chinese government.

While the ECB decision to introduce unlimited sterilized bond purchases is certainly a time buyer and thus bolsters risk-appetite in the near-term (provoking a sell-off of Japanese Yen, Swiss Francs, and US Dollars, the low-yielding safe havens), the Chinese stimulus measures are of greater importance to the Australian Dollar. On Friday, ahead of a major batch of data releases on Sunday, the Chinese government announced 60 new infrastructure projects totaling ¥1 trillion Yuan ($157 billion). The implication here for the Australian Dollar is that demand for base metals will increase, and with the mining sector being Australia’s largest, it should support the high beta currency over the coming months as these projects begin.

But we draw your attention back to the data due on Sunday: rare has been the occasion that the Chinese government has announced new measures ahead of a round of disappointing data, at least this year. With food prices rising (see: soy bean futures), the housing sector showing signs of stress, and export growth slowing (thanks to Europe), a simple monetary policy shift via the reserve requirement ratio clearly would not address the structural economic issues the Chinese economy is currently facing. Accordingly, we are keeping an eye on Chinese Industrial Production and Retail Sales data for August as perhaps the most important data this week that could influence the Australian Dollar.

After a major data week for Australian-specific data (the Reserve Bank of Australia Rate Decision, second quarter GDP, the August labor market reading, and the July Trade Balance), it is of no surprise that the coming offers little by way of critical Australian reports. There are a few however that could spur volatility over the coming days. Primarily, with the Australian housing market bubble starting to look like it’s readying to burst, the July Home Loans figures released on Monday will perhaps be the most market moving data this week. According to a Bloomberg News survey, Home Loans were flat in July, after increasing by +1.3% on a monthly-basis; Home Loans are -2.4% lower this year overall (if the start of the year were indexed to 100.0, the reading would be 97.6 assuming a 0.0% reading for July).

Traders are certainly becoming more bearish on the Australian Dollar, with the Credit Suisse Overnight Index Swaps pricing in a 49.0% chance of a 25.0-basis point rate cut at the next Reserve Bank of Australia policy meeting on October 2. Accordingly, there are -87.0-bps being price out of the Aussie over the next 12-months. While this is slightly steadied from September 5, when -104.0-bps were priced out, it’s important to note that rate cut expectations ahead of this past Tuesday’s RBA meeting were only pricing in a 5.0% chance of a 25.0-bps cut – so as of now, swaps traders are essentially 50/50 on another rate cut. As has been maintained throughout the course of the year, we believe that further disappointing data out of China will prompt a “hard landing,” which will severely damage the Australian economy, leading to an end of year key rate target of 3.00% by the Reserve Bank of Australia. –CV