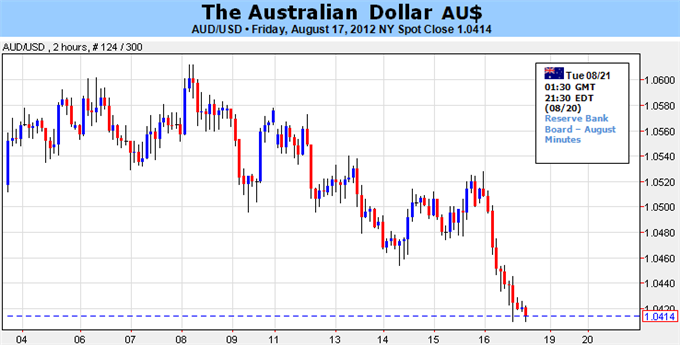 The Australian Dollar continues to show a robust link to risk sentiment trends, with a trade-weighted index of the currency’s average value against its top counterparts showing a firm correlation with the MSCI World Stock Index. This puts familiar big-picture themes – the global economic slowdown and the Eurozone debt crisis – at the forefront once again the drivers of price action. Homegrown headwinds have emerged as a wildcard as the impact of currency strength on the export sector appears to test policymakers’ tolerance levels.

On the growth side of the equation, the preliminary set of Augusts’ Eurozone manufacturing- and service-sector PMI figures will offer guidance on the severity of headwinds facing the global recovery from the world’s most sickly major output hub. Meanwhile, minutes from this month’s FOMC meeting will be picked apart for clues about the possibility of a QE3 stimulus program to be unveiled in the coming weeks, either at the Jackson Hole symposium on in two weeks or policymakers’ next sit-down in mid-September. A pickup on the PMI front and/or a dovish lean from Fed officials will likely be supportive of risk appetite as well as the Australian Dollar, and vice versa.

Turning to the Euro area, a €3.8 billion Greek bond expiry early in the week is likely to pass with little fanfare. The redemption takes on added significance in that the money is owed to the ECB, but the government effectively sold €4.06 billion in 13-week bills last week and so should have no problem meeting its obligations. A Spanish cabinet meeting and press conference may prove more significant as traders evaluate the possibility of a formal bailout request. Prime Minister Mariano Rajoy has said that he will not take such a step until the ECB unveils the details of its “nonstandard” support scheme for the bond markets, but that has not scattered speculation of a rescue effort sooner. Madrid is also scheduled to sell 12- and 18-month bills. Finally, German and Greek heads of state are due to meet on Friday, with traders paying close attention to the sideline commentary for direction cues.

On the domestic side of the equation, early signs of an official effort to rein in the Australian Dollar appeared to have emerged after a report from the Treasury published late last week argued against an SNB-style effort but suggested a tightening of fiscal policy or additional cuts from the RBA would be preferable. While this is by no means an indication of imminent intervention, it does suggest policymakers are seriously exploring possible options for future action. The Aussie tumbled Friday as the news came across the wires and investors will now look for signs of follow-through to gauge the seriousness of the threat. With that in mind, minutes from the RBA’s August meeting and central bank governor Glenn Stevens’ testimony to the House Economics Committee will be monitored closer than usual.-IS