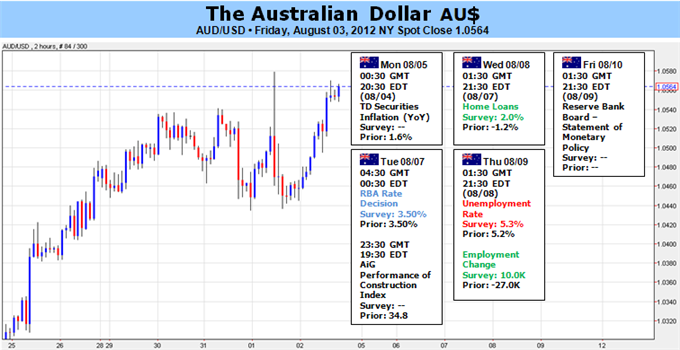 The Australian Dollar had another strong week, finishing as the second best performer trailing only the New Zealand Dollar, to which it shed a mere -0.31%. Overall, the Aussie’s strong performance came against the British Pound, which it gained 1.49% against, and versus the Japanese Yen and the US Dollar, which it appreciated by +0.83% and +0.81%, respectively. But the Australian Dollar’s climb was barely the result of domestic data or even economic developments out of China; but rather a surge in risk-appetite, lifted by collapsing European sovereign debt yields and surging global equity markets (with a correlation hovering around +0.90 to the Dow Jones Industrial Average, the Aussie is lifted when there is demand for yield).

Nonetheless, domestic developments were positive for Australia this past week, with the June Trade Balance unexpectedly showing a small surplus (+A$9M versus –A$375M expected), suggesting that demand for commodities across developing Asia remains strong (a positive for global growth sentiment), and the June and second quarter Retail Sales figures coming in better than expected as well. Overall, alongside Chinese data that has evened off in the short-term, indeed the fundamental construct for the Australian Dollar has become more positive in its own right.

In light of these developments (better Australian data; ‘progress’ in Europe; all quiet on the Chinese front), and in light of what we expect in the week ahead, we hold a very cautiously bullish stance on the Australian Dollar for the week ahead.

In terms of domestic economic events during the first full week of August, there are only two items of interest on the docket that will have any longstanding influence on the Australian Dollar. On Tuesday, the Reserve Bank of Australia will meet for its August policy meeting, at which it is widely anticipated to keep its main overnight refinancing rate at 3.50%. Overall, the Reserve Bank of Australia has kept its key policy on hold at 3.50% since May, when it was cut there from 3.75% (preceded by a prior 25-basis point cut from 4.00% in April). According to the Credit Suisse Overnight Index Swaps, odds for a rate cut have dropped substantially over the past several weeks, with only a 16.0% chance of a 25-bps rate cut being priced in at present time, from a 71.0% chance on July 12. If there is a rate cut, it will catch market participants off guard, and likely sending the Aussie much lower; this is the least likely outcome, however.

On Wednesday, our other data of interest, the July labor market report, will be released. According to a Bloomberg News survey, the Australian economy added +10.0K jobs in July, have having shed -27.0K in June. This would represent only a modest improvement for the labor market, which has been adding an average of +4.6K jobs per month for the past three-months. What we’ve noticed over the past several months, and especially in 2012 on the whole, is that forecasters have tended to miss, and miss by a fair margin (2.5 to 3 standard deviations, in some cases), on Australian labor market forecasts. Thus, we think a surprise is not out of the picture, given what history has displayed.

Beyond the Reserve Bank of Australia Rate Decision and the July labor market report, we look to calming volatility figures as a proxy to global growth concerns and general risk-aversion as a guide for helping forecast the Australian Dollar. One-week implied volatility for the AUDJPY and AUDUSD dropped off significantly the past few days, plummeting by -23.7% since Thursday for the latter. This comes alongside what has now been considered a reprieve in the Euro-zone crisis, as European Central Bank President Mario Draghi has indicated that his central bank could buy short-term Spanish debt, should the country need bailout assistance. It’s clear that as long as there’s a lid on Europe, AUDUSD volatility should remain low; and given the correlation between AUDUSD one-week Implied Volatility and the AUDUSD (-0.646 for the past 5-days), this means that a fundamental deterrent for the Aussie has been muted (for now). –CV