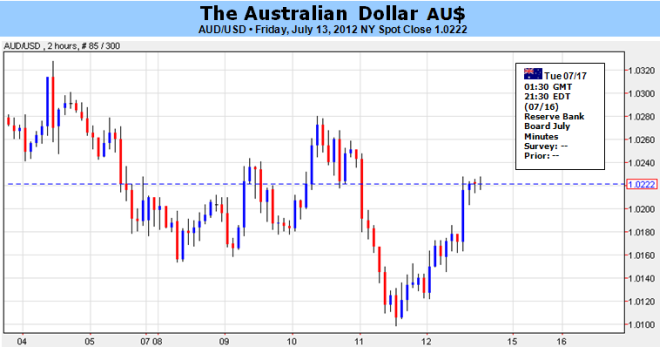 The Australian Dollar had a mediocre week until Friday, finishing down 0.17 percent against the US Dollar. Until Friday’s rally, the Australian Dollar had shed 0.69 percent against the US Dollar and was the second-worst performing currency, just ahead of the New Zealand Dollar. Indeed, the surprise reaction to the second quarter Chinese growth reading – perhaps an indication that many were expecting something even more discouraging – help lift the high beta currency into the middle of the pack on the week.

Of note: the EURAUD hit fresh lows below 1.2000 for the first time in over two-decades, and with prospects for more global easing on the horizon – especially out of China and the Euro-zone – the Australian Dollar could have an implicit bid underneath (for a long-term trade through the end of the year) as global growth slows. But with that said, we do believe that the Australian Dollar has a bearish tone for the coming week.

While there are no major data releases due in the coming days, we do see that the Reserve Bank of Australia will release its Minutes from its recent policy decision on Tuesday. At the rate decision, policymakers voted to keep rates on hold at 3.50%; the key rate has been cut from 4.75% since November. Governor Glenn Stevens noted that “[I]n Australia, recent data suggest that the economy continued to grow in the first part of 2012, at a pace somewhat stronger than had been earlier indicated. Labour market conditions also firmed a little, notwithstanding job shedding in some industries; the rate of unemployment remains low.” This actually poses a problem for the Reserve Bank of Australia going forward, considering that the Unemployment Rate ticked higher to 5.2% in June, and all but 0.8K jobs were wiped out from May (the June Employment Change was -27.0K and the May figure was revised lower to +27.8K). While these data will not be reflected in the Minutes, any commentary discussing the labor market should be eyed carefully.

Also at the July meeting Governor Stevens noted that “[G]rowth in the world economy picked up in the early months of 2012, having slowed in the second half of 2011. But more recent indicators continue to suggest weakening in Europe and a slower pace of growth in China…Commodity prices have declined, which is helping to reduce inflation and providing scope for some countries to ease macroeconomic policies.” Chinese GDP grew at a slower than expected pace in the second quarter, and concerns for further weakness are likely to rise.

Aside from the Minutes, which will largely reflect the sentiment relayed by the Governor Stevens immediately after the rate decision, there’s not much due by way of the Australian economic calendar. Similar to the New Zealand Dollar, we expect the Australian Dollar to trade closely to global risk-trends, largely predicated around China and the Euro-zone. If not Chinese stimulus package materializes, and no further improvements are made in Europe, the coming week could be rough for the Australian Dollar. –CV